Cruise-control mode. Danny and Frank made sure of that. More after the jump. 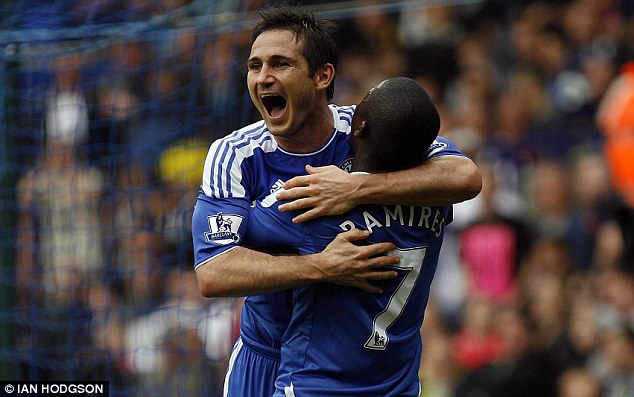 Well that was sweet now wasn't it? This was a display a long time in the making, and at last the Blues put together their most complete performance under Andre Villas-Boas. There may still be defensive question marks with this squad, but I owe a lot of that to the high-line we're utilizing. Still, this was a resounding victory that was essentially put to bed after one minute and thirty seconds. No joke. Bolton were that atrocious. Some horrendous defensive marking, loads of space to roam, and endless time on the ball was the soup du jour, and the Blues took their chances where available. Let's get right to the match for those curious as to how it all played out. And for the first time, friends, I am going to recap this by extrapolating my notes I took while watching this live in Los Angeles at 5:30 AM. Buckle up for shenanigans.

5:27 AM - My alarm rings, and instinctively I hit the snooze button. It's sort of my thing. No matter what time that damn thing goes off, even if I'm twenty minutes late, I still have to sleep for a few more minutes.

5:37 AM - Shit, the match started. Okay, lets play catch up shall we? Lineup for the Blues is rather strong, and fairly close to many of your predictions. Cech; Bosingwa, Terry, Luiz, Cole; Meireles, Lampard, Ramires; Mata, Drogba, Sturridge. Bench is solid too- Turnbull, Romeu, Lukaku, Malouda, Anelka, Ivanovic, Mikel. As for Bolton? Well Kevin Davies and his gigantic ass are back in the starting lineup. Teams are standing side by side in the tunnel. Luiz appears to be practicing his 'boot-in-your-ass' kick against the wall. Either that, or he's taking a liking to Muy Thai. Either way, he looks dialed in. AVB stands next to the team with a knowing smile on his face. I like our odds.

5:39 AM - Bolton field as good of a side as they can muster. Kevin Davies and his gigantic ass return to the Starting XI next to David Ngog. Davies has an extra special lovey-dovey good luck word for Danny Sturridge. Sturridge smiles courteously before stepping on Bolton's proverbial throat. Oh wait, that hasn't happened yet.

5:40 AM - Game is off and running, and immediately I'm hungry. This always happens- before the match starts I can't bring myself to eat, then a kick occurs and my stomach decides it needs sustenance. Fuck that, I'm going to wait this out. Game seems to have a bounce in its step already with Chelsea under instant pressure from the Wanderers.

5:41 AM - Early corner for the Blues after Sturridge's cross is blocked after an outstanding lead pass from Luiz. Mata lines up to strike. I like how he's become the preferred choice to Lampard on these- seems to get better height and swing on these. Cross coming and....DANNNNNNNNNNNNNNYYYYYYYYYYYY! Completely unmarked in the box, heads into the ground and we're off and running. Love how he held back the celebration. Class.

5:41 AM - I'm suddenly reconsidering my willingness to suppress my appetite after that goal. Ninety seconds in, this is about as great of a start as possible. Okay fine, I'll wait for another goal before getting anything to eat. At the rate we've opened the match, I think this could be sooner rather than later.

5:43 AM - David Luiz has miles of space in front of him, and he's not wasting it. I'm expecting him to pass, but it seems each time he's pushing up with the run and leaving lovely thru passes for Sturridge. I like this. I like this a lot. Bolton have no answer for this play. Keep doing it.

5:47 AM - John Terry takes a David Ngog boot to the balls. That looked painful. He's writing in pain. Dr. Eva makes her way onto the pitch. Cue the uncomfortable silence whilst she attempts to diagnose the injury from a safe distance. Announcer A sniggers to Announcer B about the fact that she should "leave it to the fella" instead. She complies. Bet she gives wicked hand jobs on off days. ANYWAY...

5:50 AM - Great understanding between Drogba and Mata there almost results in a lovely strike from Didier but he can't corral the pass in time. It will be really interesting to watch how Mata and Diddy integrate themselves. Sidenote: Luiz is gliding across the pitch at the moment. He looks like a gazelle. Either that, or a young Riccy. Respect.

5:53 AM - Bolton go to the well and uncover their only apparent offensive move- cross into the box for Davies who rises and heads on but fails to connect properly. If this is all Coyle has in his toolbox then we're well and clearly on our way to a comfortable afternoon. The defensive resistance has been so slack, I wish we'd started Lukaku to get him some goals. Somewhere in London, Nando is watching this match with a scowl on his rosy visage.

5:55 AM - EAT A DICK HATERS. FRANK LAMPARD DON'T PLAY. GOOOOOOOOOOOOAAAAAAAAAL! Did we really just put that play together? That was about as beautiful of a goal as we've ever created!

5:55 AM - Watching the replay of the build-up to that goal in slow motion, it's a thing of beauty. Terry on the left side, passes to Lamps across the line, who swings it to Mata in the center, who dribbles forward and executes a perfect give-and-go with Rami, who back heels it to Mata on the run, who passes ahead to Danny, who stalls on the inside right of the box, and leaves it for Lamps to drill under the outstretched arms of the keeper. Utterly sublime. If this was Barcelona, we'd be forced to watch a hundred replays of that goal in a testament to the beauty and wonder of the game. Somewhere in Uzbekistan, Uncle Phil Scolari is sipping on hot tea in disgust.

5:58 AM - This Bogdan fellow looks utter shambles between the sticks. I get that he's only made four EPL starts in his young career, but talk about negative body language. Everything he does has a sheep-dog look it. He's letting in a couple more today, book it. Almost lets Lampard net! Drogba leaves for Frank who fires from the left with his left, but miraculously Boggy gets a hand to it and catches the result.

6:00 AM - Chelsea's approach seems to be simple- get the ball on the right to Danny and let him run at defenders. And here he comes again with another shot and.....GOAAAAAAAAALLLLLL! Boggy with the screw-up! This is high comedy! Studge neglects to celebrate out of respect once again. Bolton fans need this right now like I need another op-ed on the wonder that is Gareth Bale.

6:00 AM - You won't believe this shit. Luiz runs some 80 yards unmarked, squeezes off a shot from outside the box, and Lamps corrals the resulting flub save by Boggy and nets. In the space of 60 seconds, we've doubled our lead. Breakfast, you're officially back in the mix! Also, I'm just embarrassed for Boggy and his Bieber-esque mop of red locks. Commentator notes "this is just awful goalkeeping". I want to disagree but I can't.

6:01-6:20 AM - I'm eating breakfast, but from what I can gather after the fact, we bossed it. And nothing of note occurred. Owen Coyle looks like he needs stiff drink. We hit halftime, and the mood in the house is positively buoyant. Breakfast has been consumed, and now it's time to catch up to the second half.

6:22 AM - Oh lord, Boyata nets off a set piece. If we have an achilles heel, it's defending set pieces. But I'll let this slide if we don't concede again. Bolton have come out of the gates with a bit of bite in their step. Kevin Davies is continuing to operate off the right side. No word on how his ass feels about the position change.

6:30 AM - AVB removes the BAWSE from this match. On comes Bane, and I must say, I find this to be a brilliant tactical wrinkle on the part of the gaffer. All season long, he has resisted the urge to throw Bane into the right-back slot, but here he is, ahead of a two week break, trying it out. I'm curious to see how this goes.

6:33 AM - Ramires fires high and wide off the set piece. Boggy completely misses the ball on the corner, it falls to Rami but he just whacks at it. If I could buy Rami a Secret Santa present, it would be Robby Stahl's Soccer School DVD. No really, it might help. He should have at least six goals this season.

6:33 AM - REAL NAME NO GIMMICKS HAS ENTERED THE FRAY. SHIT'S ABOUT TO GO DOWN.

6:34 AM - Again, Luiz gets forward and plays the ball into the center for Drogba who spins and fires wide. The most remarkable thing about this match? The speed at which our attacks are developing. A lot of credit has to be given to Luiz, who is obviously more competent going forward then getting stuck in. Sure he's reckless, and yeah he makes plenty of mistakes. But he might just be the best attacking defender in England. Might. Time will tell. At this rate though, he's making it almost impossible for AVB to pick anyone ahead of him.

6:35 AM - HAT. FUCKING. TRICK. FRANKLIN. DELANO. LAMPARD. As has been customary all throughout the match, this goal results from another brilliant team move, with plenty of quick touch passing all along the box before Frank slips into the box and does what he does.

6:37 AM - Oh hey, that's why Luiz isn't a guaranteed starter. Bonehead yellow earned for blocking the run of Ngog. I mean shit, you didn't need to block him Bob, Ngog ain't scary anyone- especially Petr the Great.

6:49 AM - Mata is removed from duty in favor of Nelks, who gets a standing ovation from the Bolton and Chelsea fans in attendance. Nice moment for him personally. Can't fathom the idea of not having him next season.

The remaining moments: JT gets a yellow for a soft foul, Owen Coyle risks the wrath of every Bolton fan by removing Ngog (who worked hard throughout), Eagles zings one off the post that does not cross, but meanwhile, Ivanovic clears one off the line that should have counted. Tough day at the office for the Wanderers. You get the sense that this was a match that we couldn't lose even if we were tried. Such shit were Bolton in the first half that they may as well have fielded a reserve side.