John Terry is facing consequences of a substantial nature as the FA begin their investigation into whether or not the England and Chelsea captain racially abused Anton Ferdinand during Chelsea's 1-0 loss to QPR last weekend. His captaincy is on the line. His reputation with Chelsea supporters such as myself is as well.

Hard news on what actually transpired Sunday afternoon has been pretty much nonexistent, so many of us were highly anticipating a word from Ferdinand on the incident. What do we get when the man finally speaks?

A farce. A fucking farce. 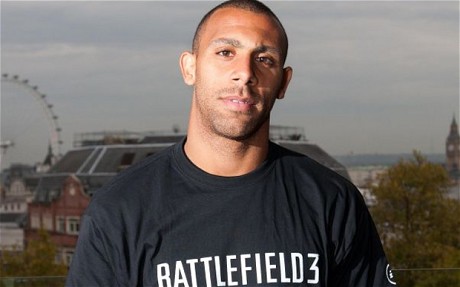 The Telegraph was lucky enough to land an exclusive interview with Ferdinand on Wednesday, the first time the Rangers defender has spoken since the alleged abuse. If, like me, you came across the link on Twitter, you were probably quick to click it and thinking you were going to get some real answers.

What we get is a puff piece apparently backed by Sony. As you can see above, Ferdinand is sporting a Battlefield 3 shirt for the article's accompanying photo. The game is mentioned throughout the story and, to take it even further, this is published at the end of the piece:

Anton Ferdinand was playing Battlefield 3, out now on PlayStation 3, Xbox 360 and PC. For more information visit www.battlefield3.com/uk. For the latest news visit facebook.com/battlefield3 or follow twitter.com/battlefield3

Is this a fucking press release?

It gets better. Ferdinand actually refuses to answer any specific questions on the incident. None.

“I don’t want to talk about that,” was his terse reply. What he actually wanted to talk about was the new computer game Battlefield 3, which he was promoting in London.

Then, I must ask, why conduct the interview? I guess there's the chance that Jonathan Liew and Jeremy Wilson showed up at some promotional event Ferdinand was attending, but, still, why publish such cookie-cutter nonsense? Oh yeah, hits. Nobody really cares about his love-in with Jason Roberts or the determination it takes for a player to play in front of 40-50,000 people. I don't care what he thought of Rangers' performance at Stamford Bridge. This is Anton Ferdinand, a second-rate defender on a second-rate team; the only reason I'm reading this piece of shit is for his side of the story regarding the race row. That's it.

You don't have anything on that? Really? Unbelievable.

Well, I am half-wrong. Not half-wrong, but maybe an eighth or so wrong. The Telegraph does manage to get something out of Ferdinand. He actually admits that he doesn't actually remember hearing anything from Terry during the match. Wait, so you don't even know what he said to you?

Ferdinand accepts that he did not directly hear what Terry said to him during Sunday’s match, but was sufficiently concerned by subsequent footage of the incident for QPR to request an investigation.

What you are saying, then, is that the club, under your advisement, decided to file a complaint based on video evidence, from which it's impossible to tell what the hell Terry is saying? Talk about clutching at straws. Now I'm not saying Terry didn't racially abuse Ferdinand; I'm also not saying he did. But if all we have to go off is the video footage, then something is severely wrong with this picture (pun intended).

So, what did we learn from this interview? Nothing. I mean other than nothing. Well:

Again, I don't know if Terry is guilty or not. What I do know is that shit like this makes it look ever the more unlikely. Actually, it's shit like this that sees legitimate complaints swept under the rug time and again. Inexcusable.