Villas-Boas Gets Charged by FA + JT on the Ropes

Share All sharing options for: Villas-Boas Gets Charged by FA + JT on the Ropes

It hasn't exactly been the best of weeks in the land of Chels. This QPR dust-up seems to be lingering, and the fallout only now taking shape. As such, the FA have charged AVB over his incendiary comments pertaining to the officials, and John Terry appears to be in the midst of another wrangle with the authorities after the internet decided he was guilty of saying some shit to Anton Ferdinand. Lord. More, after the jump: 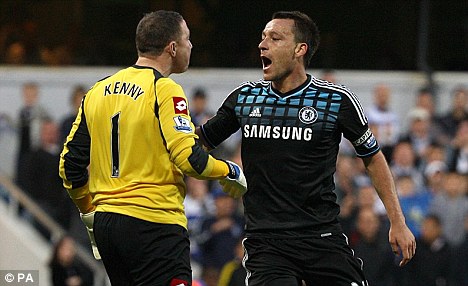 So the FA, that bastion of order and efficiency, has done what you'd expect. They've hit out against us and charged us with 'failure to control' our players (which was necessitated by the 2 red and 5 yellow cards earned). As well, they've decided that AVB needs to 'explain' his comments regarding Chris Foy and his officials. Um, just stepping out on a ledge here, but what about AVB's post-match commentary was unclear? Was he upset? Certainly. Did he use strong language? Yes. Has he backed down from his claims? Nope. So, there you go Football Association- the evidence is widely accessible, the man himself refuses to refute them, and we can all agree that you have enough data now to do what we're already expecting. A hefty fine, a touchline ban, something to put him in his place I reckon. Whatever the case may be, don't pull a Man City and delay the inevitable. Just get on with your business and suspend him from the Arsenal fixture like we anticipate happening.

Now, lets switch gears to England's Brave. Look, this isn't a minor issue, and if there's even an iota of truth to the allegations, then they have to be dealt with expeditiously and with force. Nobody, including our own, should be above reprimand when it comes to racism and abuse. That element obviously needs to be stamped out with force, so if it comes to pass that John did say what the Internet is claiming, then we all will have to accept the realities of whatever punishment lies ahead. I find it slightly odd that QPR waited two days to release this information to the public, and Anton has kept his yap shut on what really went down. Rangers claim there were two to three witnesses that can corroborate the claims against John. Hard to imagine any of them were wearing anything but Ranger colors. The club responded to the allegations by putting out an official statement, EBALJT got ahead of the press cycle by issuing his own, and now AVB has backed his captain by asserting the club are 100% behind the player. Not exactly case closed, but certainly nice to see the club closing ranks around this issue.

AVB has already claimed that Ferdinand and JT had words in the Chelsea dressing room after the match, and the issue was amicably put to rest. Now, the matter seems to have legs, and you can bet the press will be running with this story for the foreseeable future. First the pet shop fiasco, now the racism allegations. All told, it's not been a good stretch for John. Here's hoping he can rally past the distractions and carry on with the matters on the pitch, which at the moment, are looking to be a bit of a bother. With players injured and suspended all over the map, we'll have to wait and see how AVB rotates and what lineup he rolls out on Merseyside tomorrow. But none of this should distract from the fact that the club have some PR madness to deal with. Lest we forget the looming CPO vote on Thursday? Yeah, me neither.