You can't make stuff like this up. England's Brave John Terry was today, amid training and fighting this bizarre racist abuse claim, to serve as grand opener at Reptile Kingdom near Cobham. Wait, what?

Terry, of course, did not show up, much to the dismay of many, including the young one below. 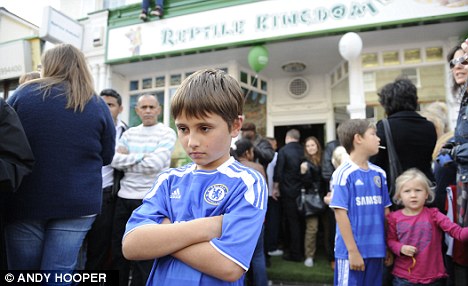 Apparently there was a mix up with the owner and, according to Terry, he was never aware that he was to make an appearance at the pet shop.

EBJT released a statement on the incident:

There appears to be some confusion regarding my attendance at an opening of a pet shop today in Surbiton. For the avoidance of doubt, I had not agreed to attend the opening of this or any other shop today. I had been asked if I would consider the opportunity and declined on two separate occasions. That is as far as the matter went. No agreement was made for me to attend or any plans put in place by me or the football club. Any advertising or announcements to say I would be attending were made without my knowledge or consent. I very much regret any distress or disappointment that may have been suffered by the public.

I mean, this is just weird. I'm not quite sure what's going on here to be honest, but I do fancy Terry's excuse. I have no idea why someone would expect the Chelsea and England captain to show up at a smallish pet shop off Ewell Road. Now, if it was a brothel ... I kid, I kid.

Moving on from that spot of oddness to something far more serious: the racism allegation toward Terry that surfaced yesterday. Many seem to believe that Terry racially insulted Anton Ferdinand during the second half of our 1-0 loss to QPR on Sunday. Rangers have yet to file a complaint - they do plan to meet to discuss whether to do so. Terry, meanwhile, wasted no time in issuing a statement vehemently denying the allegation. He didn't so much come out and say he didn't say what he's accused of saying so much as say he said what he said in response to Ferdinand accusing him of saying it.

Weird. I'm not quite sure how that exchange went - good luck figuring it out - but I know that I don't believe Terry is a racist. I mean, Ashley Cole was standing right next to him while this whole incident played out. I guess I just find it hard to believe that, as captain of such a multi-cultural team, Terry would be some closet Grand Wizard.

Still, this isn't the first time Terry has been accused of racism. There was an incident with Ledley King in 2006, and I seem to recall something with Samuel Eto'o also surfacing a few years back. Now, I'm not trying to point out a pattern here, but it is all just a bit strange.

Nevertheless, I back our captain unless there is significant evidence to the contrary. And, after seeing multiple videos of Sunday's incident, I fail to see anything to suggest racism. Hell, I don't even think he says what he's been accused of saying. Obviously we'll have more on this as it becomes available.