If anyone wants to complain about this team's tenacity, heart, or passion, I'll be right here to kick you in the balls. More, after the jump: 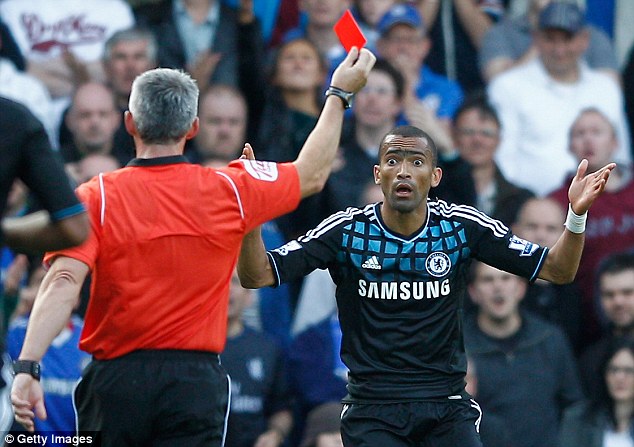 I won't let anyone hang their heads after that second half. Sure, the first was fucked eight-ways to Tuesday before any rhythm could be established, and yeah, we had a lot to do with the cards handed out. But don't you dare take anything away from this other then the sheer tenacity, grit, will, determination, and tactical brilliance of a squad that should be lauded for keeping the score respectable after the odds swung wildly against us. As per usual, I woke up extra early on the left coast (first I watched the Manchester demolition) before keeping a running list of thoughts as the match sparked into fury like a Balotelli bathroom firework. But I can't share the list, because it fell apart and I stopped keeping track of what was going on, rather, electing to shout en mass at my television. And for the record, QPR fan, I could respect you if you weren't busy mugging your tough-as-nails routine from every other club in the country. Be loud, be proud, you have every right to do so. But this faux-hard persona just ain't working or impressing any of us. As hostile as you might have made it this afternoon, I can promise your next trip to The Bridge will be reciprocal in nature. Perhaps a few of our fans will toss the rock down the touchline in a blatant time-wasting effort. Then, and only then, can you complain. For now, take your three points and realize that you escaped by the skin of your damn teeth. What follows are some key lessons and thoughts contrived from what was otherwise a feisty West-London Derby.

Bro, seriously, you need to calm the shit down. We seem to touch on this weekly, either you're making miraculous tackles or sticking a wrong foot in. I'll admit, today, you might have gotten the short end of the stick on the penalty call (dubious at best- and if any QPR supporters want to argue the 'nudge' angle, what of the 'nudge' Luiz received first before his retaliatory hit?) you're still a loose cannon. Way too loose. You need to tighten up, sharpish. We can't keep having this happen and you've only had 14 premier league starts, in which you've already collected a whopping 7 yellow cards. You could have gotten a red with the number of reckless challenges you deployed. But then, you go and forage up the pitch and unleash that bicycle kick. My word. That was fantastic. But again, you're a center half, and not a forward. I applaud your enthusiasm, I admire your tenacity, but pick your damn battles son. This isn't a sprint, it's a marathon. I shouldn't have to worry every time the ball comes to your attacker that you're about to commit a foul.

Attempt to argue against this, I dare. After going down two men at the half, Villas-Boas brought the squad back and succeeded in keeping the match contentious and competitive. How did he pull this off? He condensed space, pushed Cole up to a left-wing position, had JT and Luiz take turns foraging forward, left Anelka alone in the striking slot, and gave him flanking support from Lampard and Meireles. The result? About as fantastic of a 45-minute stretch as we could have played. The key? AVB didn't get caught in the conventional sense of 'shape', instead, electing to field a side that was more about function than style. Yet somehow, this 9-man system seemed to ooze class, running circles around a QPR side that, lets be honest, were simply playing to protect three points. Aside from one chance in the 78th minute, the Rangers did little in the way of threatening forward. Fair play to them, they got the three points. But even more kudos to Villas-Boas, who worked his substitutions to effect, adjusted the landscape of the match, and bellowed from the touch second-by-second instructions to charge the players forward. And for one half at least, it looked like we could get something out of this. Disregard the penalty shouts, and leave it to Anelka's header which he should have turned away, and we're having a very different conversation right now. Some might want to hype this as AVB's 'Mourinho' moment. I'm not going there yet. But, it's a major sign of just how capable of a manager we have when the chips are down. Many would have packed it in and hoped to stop the bleeding. AVB went in search of blood in spite of the numerical disadvantage. Tremendous fucking props.

I can forgive a mistake. I can forgive two mistakes. But I can't forgive, what, six mistakes? God, it wasn't just bad, it was abysmal. There were blatant non-calls, dubious cards handed out, and of course, the issue of the reds distributed to Jose Bosingwa and Didier Drogba. Make what you will of those challenges, but the fact remains that those decisions significantly altered the tenor of the match. Already a hostile environment, the fans seemed to relish the prospect of having 11 v 9. Why wouldn't they- after all, this isn't just any old match. It's a fucking derby. You're not just out to win, you're out to slaughter if you can. Just ask any City or United fan what this is all about. And I think I speak for most Chelsea fans when I say we were expecting more from QPR. We were expecting the exodus. The pillaging of goals. The shambolic defending. The embarrassing headlines tomorrow. None of which, matriculated. As much as Foy did to disrupt any rhythm inherent in the match, Chelsea pressed on. The amount of cards handed out was appalling. Staggering. Pathetic. Surely, he has to be brought up for a review after this one. AVB's post-match comments alluded to this very fact, and made mention of the third-straight match in which we had the short end of the whistle. Not sure what sanctions are forthcoming for him, but you can expect a fine and even a potential touch-line ban are in store. I don't care though. It had to be said. It had to be done. If Sir Alex, Kenny D, and Arsene can mouth off every week about the refs, then surely AVB can have his say. As he put it, we're title contenders just like everyone else. Why not demand the same level or clarity, equality, and respect?

The Old Guard Still Has It

Our leaders tonight, quite simply, were the captains. John and Frank were massive in the second half. When the tensions began to flare and the potential for escalation started showing, these two legends stepped into the mix and stood up for the club. You could see the hostility in their reactions, their actions, their faces. When strong tackles were received, they were promptly returned to sender. When QPR attempted to stare down, they looked right back. They were imperious. They did all they could do. Inspirational, plain and simple. Make what you will of their age, their importance under AVB, or their performance on the pitch in spurts, but the fact remains that when things began to spiral, they stepped in to serve as a flashpoint for controversy. Shielding your teammates, taking the pressure off them, and rallying the troops in tandem, they stood tall. I have nothing but tremendous praise and respect for both- this was a yeoman's effort on their part. And I bet they're beyond exhausted after the physical nature of the match. Quite rightly so, they're due a rest in midweek. Whether or not they can afford one, with the laundry list of cards picked up today remains to be seen. Based on the current count, we'll be without the services of Didier, BAWSE, and Cole for Wednesday's Everton match, but will have Nando back in the mix. Sad to see Diddy leave on a three-match ban as soon as Fernando returns to the mix. And please, let's not diminish in any way the efforts of Nicolas Anelka. The guy still has a huge part to play this season. Extending his contract notwithstanding, his ability to hold up play and cut through defenses with his run/pass game is still sublime. Wish he had an extra two players out there to work with, surely he would have netted in this one- he looked good for a goal.

And this has nothing to do with the derby relation. I'm just not impressed. That's the best you could do? Your gaffer wants to sing to the sky that you've managed to beat us, and they'll remember this one in 30 years time? The time you squeaked past Chelsea in a home derby with two extra men 1-0? The time when you relied on a ref to hand out your only clear chance on goal? The time when you gaffer after the match attempted to ridicule the opposing manager by referring to him as a 'rookie'. Remind me what your manager has won in the last ten years? Remind me again where you sit in the table? Remind me what your targets for the season are? Soak this one up all you want, because I'm sure it tastes good. But you'll have to take a dose of reality in a few weeks time when you're hovering in the second half of the table scrapping with Sunderland and Bolton for bore draws. And Joey Barton- you marvel of a citizen. Credit for keeping your head, but if you honestly think anyone is impressed with your hard-as-nails antics, you're sorely mistaken. You belong in Oasis with that excuse for a haircut. I can't take you seriously. You're the EPL's version of Ron Artest. Any minute now, you're going to take to Twitter to say something asinine. SWP? Good on you lad for running your ass off, but honestly, what are you thinking trying to shove Obi Trice at the corner flag? Feeling a touch tough are we? I have nothing else to share about your squad because you honestly did nothing. You knocked in a penalty which Pete got a paw to, but beyond that, what can you be proud of? I'd say more, but I'm certain the QPR mass will be trolling here in no-time so why give them any more fuel to misinterpret. Might as well just be clear- I DON'T THINK YOUR TEAM IS THAT IMPRESSIVE. YOU SCRAPED PAST US WITH TWO EXTRA PLAYERS 1-0, AT HOME, WITH THE MOMENTUM IN YOUR FAVOR, AND A REF THAT WAS DOING EVERYTHING POSSIBLE TO HAND YOU THE RESULT. Argue against that, I dare.

I'm out. See you guys Wednesday for the Everton rubber match. And yeah, KTBFFH.