Chelsea appear on the verge of snapping up Real Madrid's 15-year-old prospect José Ángel Pozo. Color me surprised. More after the jump: 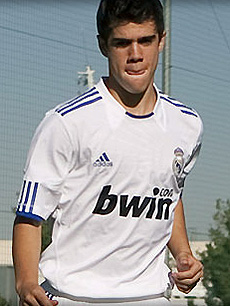 So it would seem that our quest to sign every young prospect in the world continues. After a summer of snapping up bright talent, AVB and company appear to have the engine churning once more- with their eyes directed in the way of Madrid and one of their starlets. Pozo, who at 15 is currently starring for Cadete A (Madrid's U-15 squad) is a striker that has the versatility to drop back and play in a more attacking midfield role, is a nice addition. Already, Pozo has been called up by the Spanish U-17 squad, and is the leading goalscorer for Madrid's U-15 contingent.

Beyond that, I'm low on information. For those that speak Spanish, a link to the source article can be found here. Apparently, Chelsea fended off interest from Arsenal and Manchester City to secure Pozo's services. It would seem that Pozo's desire to ply his trade in London coupled with his liking of AVB and his newfound system was enough to swing the deal in our favor. Pozo would join a growing list of brilliant youngsters at the club, and would immediately be in the youth/reserve mix.

Papers are suggesting the final fee for his services would be 500,000 quid- not cheap but certainly a worthwhile gamble for a player that has shown some exquisite potential. I'll find some video to add to this later this evening, but for now, let's keep our eyes and ears peeled to see if we learn more about the kid.