No Keano? That blows. 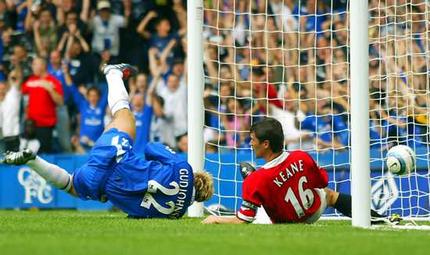 Oh Eidur, how I miss thee

Why: Because this tie actually represents more than just another must-win game. For one, we are the reigning holders of the FA Cup. Based on our form, this competition looks to be our best chance at collecting some hardware this season. And yeah, we're coming off a demoralizing loss to the Premier League's bottom club. Excuses are no more. Anything but a victory  here would be disastrous.

No Roy Keane for Ipswich. Sorry, Carlo. The man who helped shun Ancelotti's Juventus team in the semifinals of the CL in 1999 was sacked today with the Tractor Boys sitting 19th in Championship. They had won just two of nine league matches. Oh well. I heard Keano wasn't exactly popular in the dressing room anyway. So, bad news for us then. New manager syndrome + no expectations = perfect formula for Cup upset. Remember, last time they came to the Bridge (FA Cup fourth round, 2009) they leveled in the first half before we eventually netted twice after the interval to advance.

I can't see Keane's departure suddenly turning around Ipswich's woes in front of goal, however. They've scored just seven goals during the aforementioned nine-run stretch, three in a win against Leicester City. I've heard they like to lump it forward, sort of like what we've reverted to in a desperate attempt to get the Mighty One going. Of course, me pointing out their profligacy in attack will likely lead to them converting two of the three chances they get at the Bridge on Sunday. Super.

What kind of team will Carlo field? Let's ask him.

"We will play with the strongest team but maybe I want to use some young players," Ancelotti told the official website. "Maybe we could have a problem with Ashley recovering from his problem, and on Thursday Sturridge played very well against Tottenham reserves and deserves to play."

Good news is that it appears Daniel will finally get a run out from the start. I hope he strangles the shit out of the opportunity. Bad news? More of this strongest team nonsense from Carlo. It didn't work against Marseille. Why would it now? We need freshening. What better way to do so than call in the youth and tell them this is an open tryout for Blackburn. Impress here and you're in.

That's all I got. Maybe we'll actually play not with the intent of shellacking an opponent - and thus leaving ourselves ragged at the defensive end - but rather with a view to keeping a game tight and moving forward from there. How amazing would that be? Could we see a 4-4-2 from the off? I dare to dream such a thing.

Regardless, back the boys. We need an encouraging display here. KTBFFH