No banners, people: Just get behind the club

Share All sharing options for: No banners, people: Just get behind the club

Not exactly the best way to get your point across. 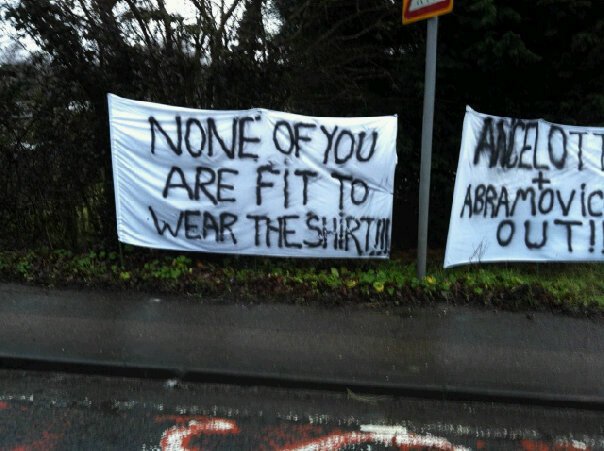 A fan protest took place outside Cobham today. The key word here being fan - yes, it was just one lad displaying his extreme displeasure with the way things have been going at the club lately.

Now when I first read about this, I initially got a huge kick out of Carlo's response, then thought this was some kind of wind up. Apparently not, though.

According to a member over at CFCnet who took it upon himself to head down to the scene of the crime, a genuine supporter was behind the banners. He says the guy was a lifelong Chelsea supporter in his 50s, who basically had the best intentions but just made a poor decision. He talked cordially to the guy for a few, and after he left, the banners were removed. Supposedly even John Terry talked to the guy, apologizing for recent results.

I say fair play to the older gentleman. We all make rash decisions. Still, this isn't how to handle this poor run of form and the growing unrest beginning to engulf the club. We need to continue to back the board, the coaching staff and the players. We're supporters - through good and bad.