Will Studge head out on loan?

Share All sharing options for: Will Studge head out on loan?

A rubbish rumour only a few weeks ago now appears an actual possibility. You have to be kidding me. 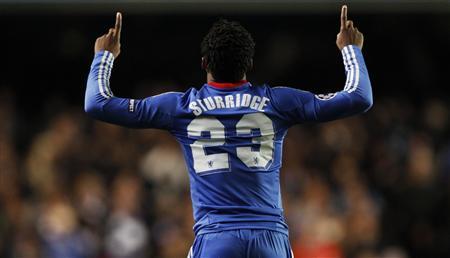 Shipping out this month?

Take a look at the photograph that accompanies yesterday's recap of the Aston Villa match. On the surface it appears a galvanizing moment. And it is for some.

Not Daniel Sturridge. The 21-year-old, instead of accompanying his teammates in a public showering of support for manager Carlo Ancelotti, trampled off to the center circle. Perhaps I'm reading too much into this, but that looks like a sign of discontent. It makes sense, too. Sturridge, who joined the club prior to Ancelotti's hiring in July 2009, has rarely featured since his high-profile move from Manchester City.

Sturridge has one league start to his name. One. This is especially baffling this season considering the form of Nicolas Anelka and Salomon Kalou. It must be both infuriating and crushing to see yourself continually overlooked in favor of a pair of players who have done little to warrant places in the first team since September.

The rumor of his intent to move on in January has circulated for a few weeks. I found the idea ridiculous the first time I read it, and I still do. But if the Independent is picking up on it there must be some legs there. Still you have to ask how we could possibly allow Sturridge to leave when we only have two other genuine strikers (not counting Borini) on the books? The board can't possibly be that daft. Wait.

So, a couple of questions:

1. What's the possibility of this actually happening? Give me some odds, people.

2. If he bounces, where does he end up? Liverpool? Will it be a permanent move or a loan?

3. If true, who's coming in? There's no way we don't sign a replacement. We simply can't afford not to. We need another attacking option anyway. Luis Suarez has recently been linked with both us and Liverpool. Lukaku is always going to be there. Etc.

4. If Sturridge is indeed estranged, what kind of problems could keeping him around present? It's not like the club needs anymore turbulence.

Bonus: A visual look at Sturridge's superb hat-trick in a training ground match last month. Lobbed Cech from midfield? Skinned the world's finest left-back? Still can't get a start? You tell me.