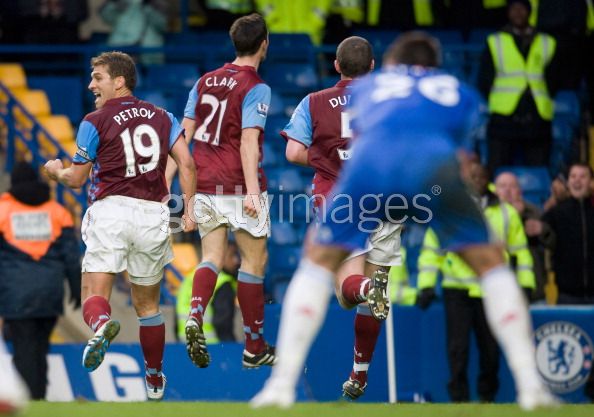 I don't want to say my expectations were high. They certainly weren't. But there was a belief nestled inside my beautiful skull that there would be something to grab hold of today at Stamford Bridge. Some concrete evidence that would suggest we were on the mend and on the up. Seemed like a reasonable view following our much-improved second half against Bolton in midweek. Boy was I wrong.

The first half was more of that lovely dross we've grown to loathe over the past two months. After I pleaded for a high-tempo start in the match preview. Good God. For 20 or so minutes, we flagged about while Villa - a team in even worse form than us mind you - proceeded to probe and probably create more than us. That was to be expected from a team that is gradually getting healthy. Ashley Young was a constant threat as was the deplorable Emile Heskey and the spry substitute Marc Albrighton. How very nice he would look in blue?

But this was Chelsea. At home. Against a team that had collected only four points on the road all season. To start so poorly was inexcusable. Somehow we still managed to take the lead, though, when Florent Malouda won a penalty from James Collins. Collins was clumsy and it was a foul, but Flo made sure the referee Lee Mason - appalling by the way - noticed. Frank duly slotted home, and we were on our way. Right?

Wrong. Instead of harnessing the energy from our third goal without reply (baby steps people), we curled back up into the fetal position and attempted to play out the half. Five minutes from the interval, that egregious plan backfired. Poor Paulo only needed to hoof away. He chose rather to play the ball out from the back, losing possession which promptly resulted in the fake Michael Essien clattering into Nigel Reo-Coke inside the area. Young deposited the penalty and, you know, here we go again. Fuck me.

Fuck me twice. Yes, more words of the inappropriate variety poured from my mouth minutes into the second half. It took less than three for our defense to capitulate and for Heskey to donkey punch the Stamford Bridge faithful one more time. This time, the man climbed all over our young defender Jeffrey Bruma to head past Cech from close range. It brought back sharp memories of that goal he scored for Wigan in 2008. Yeah, fuck that fat bastard. Anyway.

Predictably, we woke up. Oh how this team gets off on a deficit. We had Villa camped in its own half for at least 20 minutes, Friedel making superb save after superb save. Finally, with only six minutes remaining in regular time, we found a way beyond the World Heavyweight Champion when Drogba pinched one through a crowd following some good work by England's Brave John Terry. Hallelujah. We weren't done, though. The pressure continued to mount and we were rewarded when Drogba's second positive contribution of the game - a guided header toward the far post - was parried out by Friedel to Terry on the edge of the box. Our captain took a touch and finessed a shot through a crowd.

Cue the mayhem. The entire team made a bee line for Ancelotti, embracing the embattled manager with real verve and compassion. I must ask, where was this kind of emotion during the opening 45 minutes? Or the previous two months?  Of course Sturridge decided not to partake in the public homage, seeing as he hates Carlo for overlooking him consistently in favor of Anelka and Kalou. Can't blame him really. As for the moment, I described it as the kiss of death in the MotM post. Remember, Big Phil received the same treatment after Lampard struck deep into stoppage time against Stoke City in January 2009. Three weeks later, he was out.

Which brings me to the exciting conclusion of Sunday's match. At least Phil won the Stoke game; Carlo had to settle for a draw here. Albrighton was given all kinds of time on the left side to pick out a cross. Some awful concoction that our players thought was as an offside trap contrived to let Ciaran Clark do what he pleased inside the six. What he decided to do was comfortably head past a helpless Cech.

So that celebration guys. Way to go.

The Rundown
Concisely because, frankly, I'm sick of discussing dire shit.
• In truth, a win was undeserved. Villa did more than enough for their point. Furthermore, a win would have glossed over the numerous cracks in this side. Cracks that sweep through the entire organization. It's been said before and I'll keep saying it: Something is very wrong at Chelsea Football Club.
• Perhaps it's time we lower our expectations. Sounds absurd with the amount of star power in this side, but we are desperately thin, desperately low in confidence and desperately out of ideas. Looking at Tottenham, you can't deny they have a deeper, more dynamic side at the moment. Is fourth place this year's Double?
• Today's no shit comment comes from King Carlo. Speaking on the current squad after the match, he said: "I don't want to speak about which names but we do need some new players." No shit.
• Hey, we scored some goals. Sounds positive until you analyse it, and realize that we only really started to create when Villa decided to sit back a bit after going 2-1 up. And the depression worsens.
• Drogba took a bollocking from EBJT as the two headed down the tunnel after the match. The papers have picked up on it. Wonder what was discussed. Maybe it was Drogba doing the bollocking. Ideas? If anyone wants to reenact the moment, feel free to do so in the comments. I may just post it if good enough.