Tactical Thoughts On Fernando Torres - How Would He Fit Into Chelsea's Lineup?

Share All sharing options for: Tactical Thoughts On Fernando Torres - How Would He Fit Into Chelsea's Lineup?

One of the more interesting aspects of the proposed Fernando Torres transfer is how he'd move from Liverpool's team to Chelsea's. Torres has long been happiest as a lone central striker - one of the reasons Liverpool bought Luis Suarez earlier today is the Uruguayan's ability to provide goals and support out on the right without getting in Torres's way - and for Chelsea, that means figuring something clever out or choosing between Didier Drogba and Torres. Going with the latter seems suboptimal.

Leaving aside all questions on whether a Torres transfer will actually happens, we have a few problems here.

My attempt at a solution to these issues is after the jump. 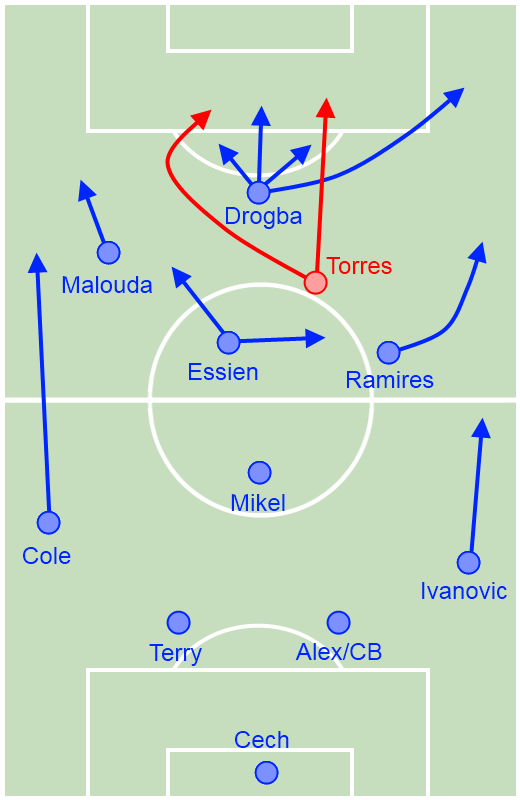 Seem a little crazy? That's because it is. Strictly still a 4-3-3, it would in practice be a very lopsided 4-1-2-2-1 system that totally does away with the normal right forward position. Let's take this back to front...

Branislav Ivanovic is Chelsea's best defensive right back, but not exactly wonderful at going forward. That's ok, though - in our proposed system a stay at home right-back is called for with overlapping runs on that flank coming from elsewhere. Ashley Cole, John Terry, and Alex/whoever our centre back is remains unchanged. I'm not sure Jose Bosingwa is playable here, since his attacking ability isn't strictly required and his not-really-there defence probably is (the right back here is responsible for the whole flank).

The midfield sees our first bit of controversy - Frank Lampard is no longer first choice. Part of that is my belief that the team has to learn how to play without him, but the other part is that the inclusion of Torres means that the other midfielders work better in their defined roles. John Obi Mikel, as ever, is the passer/destroyer hybrid we know at love. Michael Essien is the box to box terrier.

Ramires, though, has an interesting role. I would field him as a central midfielder while Chelsea don't have the ball, but when in possession and on the attack he becomes a right midfielder and Chelsea's main source of width down the right. We've seen him go on runs down that side before, and he seems far more at home with the ball on the flank than in the middle of the pitch - Chelsea might as well suit their system to one of their more expensive recent investments.

Florent Malouda can do whatever he likes on the left side. Despite a recent dip in form, I'm massively unconvinced that he's now a drag on the team, and the Cole/Malouda combination is one of the most dangerous left sides in all of football. He's cool where he is as a left forward.

That brings us, of course, to Torres and Drogba. How can we exploit the skills of both players? Torres's most obvious skill is his pace and finishing ability, while Drogba's best known for his strengths, but both are more complete players than they often get credit for being, and both require the full attention of the defence at all times. See where I'm going with this?

Overload the centre by fielding Drogba as the lead central forward and Torres behind him as a number ten. Instead of playmaking being his game, however, the primary goal is to use Drogba to hold up play and then lay the ball off to an onrushing Torres. If defenders are on Drogba, they'll be flatfooted. If they're wary to Torres' threat, Drogba has space. The juxtaposition of Torres' pace and Drogba's strength in the middle of the pitch is a really interesting option, even if it mandates a weaker right-sided attack than Chelsea might like.

I think this is a neat, if asymmetric, solution, but it might cause Chelsea's passing game to suffer a little bit. If we accept a weakness on the right (which we're doing anyway by fielding a drifting Nicolas Anelka), we can get major play in the centre, which will draw defenders away from the potent combination down the left. Without giving up much - if anything - on defence, Chelsea could use this system to generate a rather potent one-two punch whilst maintaining a three-man midfield while out of possession.

I kind of like this idea. What're y'all's thoughts?