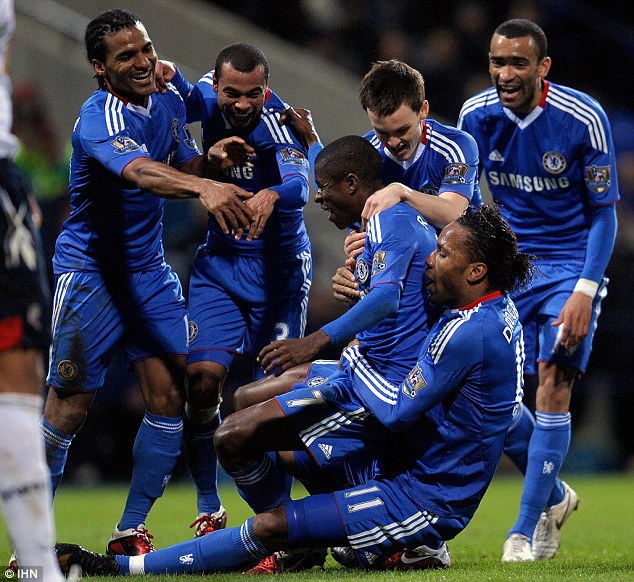 For weeks now, we've waited for a sign. A moment that would signal the return to form for the club, and serve as a definitive period on the statement of malaise we've left on the pitch for the last eight weeks. Tonight, there were many such moments that could qualify. Didier turned back the clock and served up a wonder-strike that's got to be in contention for Goal of the Month honors. Nico, clearly buoyed by playing against his old squad, had a spring in his step and poached early and often, finding the net once. The backline was imperious, led by EBALJT and BAWSE putting in tremendous shifts. Obi Trice (real name, no gimmicks) returned to the Starting XI and brought a steadying influence, and provided some beautiful forward passes that helped unlock the Bolton defense.

But no moment stands out more, in my mind, than the strike and celebration that capitulated the evening. Ramires, who has been dogged by many for his inconsistent displays, capped his best performance to date with an excellent goal and a celebratory scrum that was filled with hugs and all that other lovey-dovey stuff you didn't expect to see from a team that many in the media suggest has been off the pace and suffering from internal discontent. You could see it on their faces, the jubilation overflowing, that this was a team letting go of its demons. Whatever it was that has been plaguing us for the last two months, we shook it off tonight. It was vintage CFC, and it was damn good to see them play with purpose once again.

A return to the free-flowing attacking philosophy that Carlo refuses to abandon? Check.

We may not know just yet what the future holds for us, but three wins in three efforts, all clean sheets, all commanding performances, leads me to believe we may finally have turned the corner for good this season. Brace yourselves folks, methinks the best is yet to come from this lot.

A good strong showing from Big Pete. Came out on aerial challenges, and had a finger-tip save in the first half to deny Taylor an early equalizer. Rarely troubled in the second half, but was poised throughout. 7

Had his legs under him tonight, and stuck to his defensive responsibilities with aplomb. Didn't join in the attack all too often tonight, but clearly still figuring out his role with this squad. Remember, he barely played two months under King Carlo last year before going down, so he's got to find his niche with this system. Still, played a good game. 7

Not his best game in a Blue kit, but he handled the defensive problems posed by Bolton well. Looked tired late on when he began misplacing back passes. Could have been subbed out, but regardless, a fine performance. 7

A commanding performance. Inspiring, solid, sturdy, reliable. To think, he almost couldn't make the match. A true leader. Got into the tackle hard, and held up against the bulky Davies. 7.5

Got into the attacking mix all night, and did a nice job of pushing Taylor onto his left foot. No major mistakes, and plenty of strong tackles. Against a team like Bolton, you worry that the physicality will catch up to Ashley and his knees. But he, like the rest of the defense, held firm. 7

Good to see him back in the squad. Opinions on his worth are truly mixed, and in a sense he's like Kalou. Either you love him or hate him. But on this night, he did his job soundly. Picked up possession in the midfield, pushed the ball forward, and made the simple pass until being substituted in the second half. Still has to find match fitness but nothing terrible to report. Did well to find Malouda for the second goal of the night. 6.5

Much like his season, full of up's and down's tonight. Misplaced passes on two successive counter-attacks before picking out Malouda who centered for Anelka to slot home Chelsea's third. Stood up to the physical play and tackled hard all night. The Bison seems to be getting into rhythm at long last. 7.5

Nice to see you again, good sir. Where have you been for the past two weeks? Vacation? Well are you back now? Right good, then we look forward to seeing you do this on a weekly basis once again. 7.5

Nice to find a goal in that 1st half scrum. So much of our success depends on his ability to spread the ball from the left forward to our attackers, and you could see as the game grew and our confidence rose, Flo was the fulcrum to our attack. 7.5

Didier, I want to apologize. For weeks I've been secretly assuming that this was the end. For your career in a Blue kit, and for your future as a footballer. I ran the numbers and figured since you're 32, we've come to see the best already and this was the commencement of the slide. Then you contracted malaria, and pretty much disappeared for two months. So it's natural then that we sort of wrote an obituary for your career and assumed that you'd just kind of fade into the background, right? I AM SO SORRY FOR MY TRANSGRESSIONS! IT WILL NEVER, EVER HAPPEN AGAIN! Just promise us you'll play with this kind of vigor, and none of us will have any right to judge when you loaf around the shed end against Blackpool, ok? 8 MOTM

As we've come to expect from him. Sound, composed beyond his years, mature, and smooth. Had some lovely passes in the midfield that make any true Blue fan's heart melt. The future looks so bright every time I watch him play. Clearly due for a start sometime soon in the EPL. 6.5

Didn't get a huge chunk of time on the pitch, but still managed to fire a warning across the box that nobody could connect with. 6.5