Chelsea travels to the Reebok today in search of a third consecutive win in all competitions. A solid brick on the yellow road to recovery it would most certainly be. Just think, three wins in a row.

Afterward, there could be a small celebration. One complete with a plethora of piñatas. Come on Didier, I know you know what a plethora is. 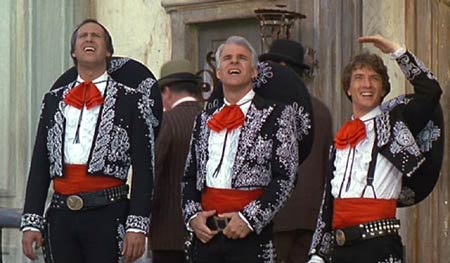 What's that I see? A winning streak.

Why: Because, like I said in the opening graph, a third win in a row would be some achievement considering how bad we've been in recent weeks. I mean, we've been fucking awful. We're already in fourth - thanks to Spurs' 1-1 draw with Newcastle - but a point is all that is required to see us leap over Tottenham on points. Yet, as we all know, a point is hardly acceptable currency for a side in search of a year-end total of 80. What's that leave us in terms of margin of error, two losses between now and May? More to the point, we are unbeaten in 14 meeting against Bolton. They have not won at home against us since 1997. We're expected to win. We should win.

Wanderers, who lost at Stamford Bridge by a single goal in the clubs' final game of 2010, have faded in the new year. Owen Coyle's men have lost three of their past five matches in all competitions. New signing David Wheater is expected to be in from the start, likely partnering Gary Cahill, who was once mentioned as a potential January transfer target for Chelsea. That talk has since ceased, what with David Luiz monopolizing any and all rumors involving the CFC. And I do mean all of them. Still, Bolton represent a stern test - as does anybody for this Chelsea side at the moment. There were fairly unlucky not to leave SW6 with something at the end of December, and are a massively improved collective since Coyle took over for Gary Megson. Johan Elmander and Kevin Davies are a fine good cop-bad cop duo. Who's Reggie Hammond?

The hosts should be further boosted by the honoring of club legend Nat Lofthouse prior to kickoff. They will be motivated - as if there was ever a question of that.

Chelsea, meanwhile, enter the fixture unaware of the status of both John Terry and Frank Lampard. Both are expected to be fit, but there are doubts, particularly over Lampard (calf strain). Better news is that John Obi Mikel is fit once again. He was on the bench for Blackburn. Lord know, we've missed his discipline and efficiency in midfield - at least in my opinion. His returns gives Ancelotti a selection headache, something he has not had in quite a while. Any three of McEachran, Ramires, Mikel, Essien and Lampard could feature against Bolton. You know how to bet on, however.

Could today finally be the day Danny Sturridge gets a deserved start? I doubt it. Count on the Malouda-Drogba-Anelka axis to remain untouched and unchallenged. The same can be said for the back four, though, again, I'd love to see Bruma in alongside Terry and Bane out on the right. How long can we continue to play a man down (see Bosingwa, Paulo)?

What else? Oh, we've had nine days off since the 2-0 win over Blackburn. That should only strengthen the argument for no surprises in the first team. The old heads have had sufficient recovery time. No excuses. All that's left to do is win. Just win. KTBFFH