I'll admit, I'm something of a sucker when it comes to transfer rumors. I get swayed rather easily with even the faintest of suggestions that we might get this young-buck-on-the-rise or that disgruntled-superstar-with-bundles-of-talent. With the way the media juggernaut churns out these stories, it's a bit hard to keep track of what's fact versus fiction.

So let's dissect the contenders and rule out the pretenders, shall we? 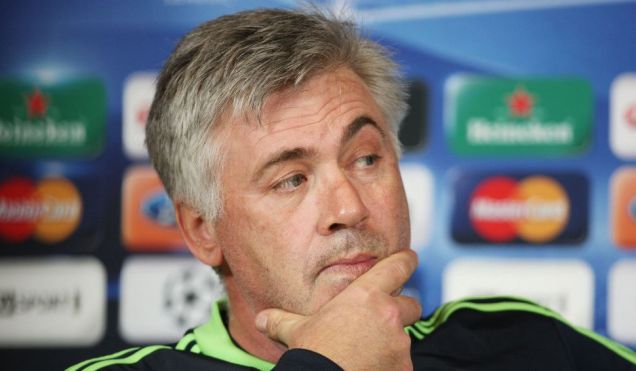 Got money, and you know it

Brass tax. We're fittin' to spend some bills this month. Frankly, who'd argue we don't need to at this juncture? Our depth has been tested this year more so than before, and we've come up lame the last two months with some atrocious performances. An injection of life is necessary, and if Carlo's not quite ready to throw the kids into frying pan, then it's time to break out the shekels and bring back the free-wheelin' days of the Abramovich era. On to the names...

Priority number one by most accounts, is a central defender to beef up the ranks. With Alex on the shelf for at least another month, and Bruma venturing to Germany for some much-needed first-team experience, brining in a reliable CB is of the utmost importance. We've been linked with lots of names, but this one keeps popping up, and for good reason. Luiz, who we attempted to snatch last summer but ultimately failed to pry from Benfica, is young (23), athletic, and has vintage Riccy hair. All good signs. He's plying his trade for a club that we've done business with as recently as last summer (splashing £18 million for Ramires) which has helped us advance the negotiations thus far. To date, we've had at least two concrete bids rejected, a £17 million bid and a £21 million bid respectively. The latest chatter suggests we're prepping to meet the £25 million valuation the club have placed on Luiz. By all accounts, he's the closest we're getting to a 'best bet' this transfer window, and he'll do wonders in shoring up our leaky backline for the remainder of the term. Still, adding another first-team CB puts us at 6. Overcrowding? Who cares, we need the help at this point.

Between Luiz and Neven, I would have taken the latter in the heartbeat. Young, rich and classy, meet young, tough, and nasty. He already has a reputation in Ze German league as being an enforcer, and a true team player (see Bane). All reports on the lad indicate he’s a better version of Vidic and would be a fixture in the CFC first XI for years to come. A natural successor to EBALJT once he hangs up his golden boots, but it seems Borussia Dortmund have no desire to part with their most-prized asset while their in contention for the German throne. A deal could be struck in the summer, but we need help now, apparently, so it seems that Luiz is our #1 target at this position.

Wow, we really dodged a bullet on that one. £70K a week for a bench player? I know we’re the famous CFC and we’ve had more expensive role players in years past, but shit, I can’t honestly justify that much being spent on a guy who ranks in the EPL as the most fouled individual to play this year. Is he a target for punishment? Indeed. Does he make us any better? Hardly. ‘Arry Redknapp and his cockney slang can talk him up in the press as being the new Nico Kranjcar or what have you, but I’m just glad we didn’t waste the cash on someone that would deprive Joshy of valuable first-team minutes in the midfield. Plus, negative points for Pienaar and his overall greed in wanting that much per week. How the hell can he justify making more than Bane, who’s about to ink an extension worth £60-65K a week? Ridiculous. I’d just like to remind you all that this deal ALMOST FUCKING HAPPENED.

Yes. Please. Make. This. Happen. Other than our shit defense this year, what’s the one thing we’ve truly been missing? A constant threat off the right side of the pitch that links play between the midfield and strikers. We’re blessed to have so many left-footed options on this squad, and the combination of Flo + Ash has been in constant motion for two years running. But we’ve become predictable in that sense. Teams know we’re looking to attack off the left side, so defenses are overloading and exposing the right flank. It’s nice to see BAWSE back on the pitch this year, slowing getting into peak condition, but we really need an attack-minded winger on the right a la Flo. So here’s our natural answer. Kid was nasty at the WC, and has expressed a keen desire to take his talents to England. The famous CFC have been in talks with his club and it looks like they’re stonewalling a bit on the pretense of holding out for a greater payday. Whatever the case may be, I suggest Romes pay a personal visit to the imperio of Udinese, Giampalo Pazzo, and have a checkbook chat post-haste, before that scunty Roberto Mancini finds out we’re interested and pips us to the punch. Which reminds me...

Read an article a few days ago indicating that Lukaku’s advisors have been in Eastlands for 15 days hammering out contract specifics for a move to MCFC in July. I nearly died. How could Baby Didier want to do us like that? This is the kid that’s been saying for years he’d love nothing more than to come to the club and learn under the guidance of the Drogs for fucks sake! But then I realized, it has nothing to do with Romelu, or Anderlecht, and everything to do with the machine that Citeh have become in the transfer window. They bought Dzeko because we were interested for almost a year. They pipped us to Tevez because we showed strong interest and the player responded to our overtures. They beat Carlo to the Ballotelli dance this past summer. Now, after months of speculation surrounding Romelu, Mancini has finally caught wind that the kid might be as good as advertised, so he’s set his moneybag owner in motion and somehow has managed to convince him that they need YET ANOTHER FUCKING STRIKER. Run the list people: Tevez, Ballotelli, Dzeko, Adebayor, Jo. Add Lukaku to that mix, and you have to wonder what the logic is up north...

I digress. Romelu needs to take a deep breath and realize he has two options. Move to Citeh and wind up riding the pine and eventually being offloaded to a second-tier EPL squad, or, move to SW6 learn from Drogs in his last two years, and eventually become the centerpiece of our three-prong attack featuring Kakuta and Sturridge. You tell me what you'd do. Ok, now figure out who the fuck advises this chap and let them know what you think.

You have to wonder if this will ever come to fruition. We’ve been interested in the kid for two years running, and as recently as April of 2010, one Harry Harris, Football Correspondent for ESPN Soccernet ‘broke’ the news that Aguero and Atletico had negotiated a deal with CFC for the transfer to take place in the summer. Didn’t really happen as advertised, so now we’re doing the song-and-dance once again. Yeah, Aguero had his buyout reduced to £15 million, but it’ll take double that to pry the best young talent from the Castilian capital. I suppose the long-lens question is does he solve an immediate need or if he’s one for the future. My answer is that he serves to be both, but I’m not drinking the kool-aid this time. I’ve been burnt too often believing in this rumor that I can’t get excited until I see the kid in a CFC kit.

....now, mind you, those are just a sampling of the names we’ve been linked with since the start of the month. That list could snowball overnight into something far more sinister, or dwindle depending on what and where we opt to spend our cash. Carlo’s been playing it coy with the press, as recently as yesterday exclaiming that we never tabled a bid for Pienaar and denying its existence. It’s clear we need something to aid us through this ‘good bad moment’ but it’s unclear where the answers lie. From my seat, I can agree that we do in fact need to add depth to the squad, but at what cost? Does it make sense to overspend on young talents that might wind up disenchanted when we are at full fitness? Or does it do us better to search for bargains and bank on the youth in the ranks? Hope is not lost, folks, and let’s remind ourselves we’re still in the hunt to win the illusive Champions League and to three-peat the FA Cup, even if the PL is a hazy memory of months past. It makes sense that the club are playing their cards close to the vest. Why over-expose our hand when we know that other teams are making buying/selling decisions off of our inclinations.

If anything, I’d suspect we dip a toe in the market, take the temperature of Luiz, and if at all possible, start and finish our spending with him. I’d venture to guess that we might also start the lengthy negotiations with Udinese over a transfer of one Alexis Sanchez in the summer months. But if all we do is add to the back four, I think CFC fans alike would be well pleased with the end product. After all, we do have a young striker (see: Daniel Sturridge) who managed to net seven goals in the span of three days, but still can’t find minutes when it matters. So then there’s that to hang you hat on, right?