The Cup defense is still alive. Two goals from Milan Lalkovic, his last in the final minute of regular time, helped holders Chelsea erase a halftime deficit and progress into the fifth round of the FA Youth Cup. 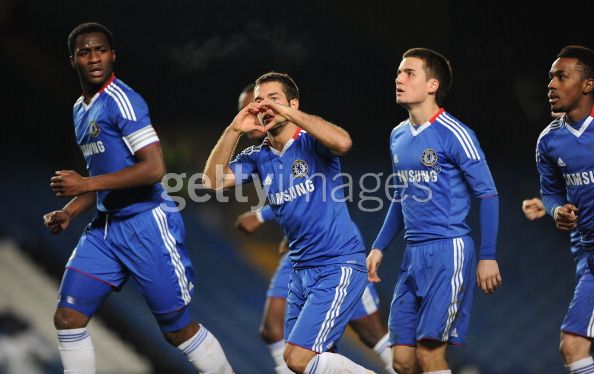 We heart you, too

Our Under-18s put on a show and deserved to advance. Defending was not spotlighted on this day - from either side really - but we created a majority of the scoring chances and were unlucky to fall behind following a very early own goal from Billy Clifford. This came inside the opening minute.

Chance after chance arrived thereafter, with Arsenal goalkeeper Emilano Martinez making a handful of quality stops. The second half was similar in vein to the first, except with added guile. Josh McEachran was orchestrating, Lalkovic was poaching, George Saville was roaring to life and, well, Nathaniel Chalobah was bending bars with his teeth. Lalkovic leveled only four minutes into the second half; from there, we were rampant. it seemed a regular-time winner wasn't in the cards, though, as we began to fatigue. That was until the Slovakian popped up with a cool left-footed finish following a nice cross from schoolboy Adam Nditi.

"It is very pleasing and a massive result to beat an excellent side like Arsenal," Chelsea youth team manager Dermot Drummy said according to the official website. "It would have been a good final and the mentality that the boys showed to come back was fantastic. Milan Lalkovic was brilliant. He made things happen by turning play around and running in behind their defence, and he finished two wonderful goals. It was a good occasion with 7,000 fans at Stamford Bridge cheering us on."