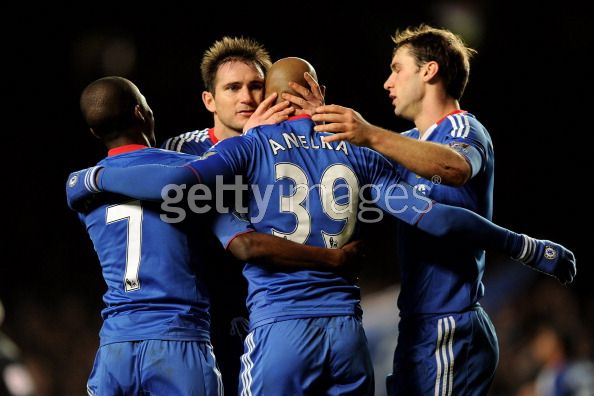 Jonathan Liew of the Telegraph summed this one up before I even had a chance to revisit the scene.

"Grinding out wins in adversity may be the hallmark of champions, but still, this was about as unsatisfying a 2-0 victory as it is possible to imagine. For a team low on morale and down on their luck, it is a start, but Ancelotti will be aware it is no more than that."

I wholeheartedly agree. Something still ain't right with the Chels (read sentence with an Alabama twang). I do love me some points, and points - at least three in a bundle - have been hard to come by of late for this side. But don't let the accumulation of said points hide the fact that we were not that good today. In fact, from my perspective we were the same old Chelsea of the last two months for large portions of the match.

Doom and gloom, I know. There were signs of improvement, particularly in the second half. The effort of pretty much every player cannot be questioned today (Florent being the only candidate, and he redeemed himself somewhat after the break). That in itself is a major step forward for us. I just think that we can't overlook the fact that there is still a long, long way to go before this team is back playing as it was in August.

On to the game. We sprung from the gate à la el toros en el Pamplona encierro. It was pretty damn refreshing. Ashley Cole was serving as an extra winger from the opening kickoff, while Bosingwa was attempting to do the same on the right. There was speed about our play and quick interchange too. No goals, though. No real chances, either, save for the very impressive Ramires pinging the crossbar after following up a corner.

As chances continued to not arrive, our promising start turned into mush. Lots of passing on the outskirts, but in the final third nothing of note to report. Of our 31 total shots on the day, only six were on target. How many of those on goal came via set pieces I wonder. This really is a serious issue, and why we are pursuing a new defender ahead of an attacking player in this transfer window is more than baffling. That's a conversation for another day, though. Back to the game.

The first half continued in that vein, a vein similar to the one seen in the loss at Wolves. The only difference here was that Blackburn didn't take their chance when it arrived. Chalk that down to Petr Cech, who made a wonderful save to deny David Hoilett around the 30-minute mark. This after Olsson had tested Cech maybe 10 minutes prior.

Much of the later part of the half featured Bosingwa, again caught in a mighty struggle with his delivery, trying unsuccessfully to find someone in the box. Lastly, there was Anelka, who redirected an inviting delivery from Drogba onto the post/crossbar.

Halftime. And I'm feeling like I've seen this shit before.

The second half was some good and more of the same. More good, though. There was a real drive about us from the opening kick. Malouda, who was woeful in the first half, started drifting all over the pitch. He was intent on making an impact, and though his confidence is still at an extreme low, he did find a way to contribute via set pieces later in the half. Drogba, too, started to get after it, even if he is starting to look beyond it. Essien, well, he never really showed up.

Nevertheless, we were pressing well and were rewarded 12 minutes into the half. Malouda sent in a cross, England's Brave John Terry flicked it on to the back post and man's man Branislav Ivanovic found a way to score through a wall of Rovers on the goal line. Relief, for me, you, the players, Ancelotti and everybody at the Bridge. From there, we did push on but not like I would have liked. We were creating without really creating.

The most glaring of the missed opportunities - of which there were many - fell to Drogba, after Chris Samba tried to play a backpass to Paul Robinson. It was a woeful attempt, one which Drogba steeled in to snatch up. Yeah, he snatched at the shot too, right at Robinson who was miles from his goal. Fortunately, we were able to avoid a nervous final 15 minutes when Bane once again threw himself in for the cause.

The Serbian colossus leapt like a fresh salmon - always wanted to say that - to meet a Malouda cross. His header was certainly on its way into the net, but Anelka made sure from close range and finally we could celebrate a most valuable three points. 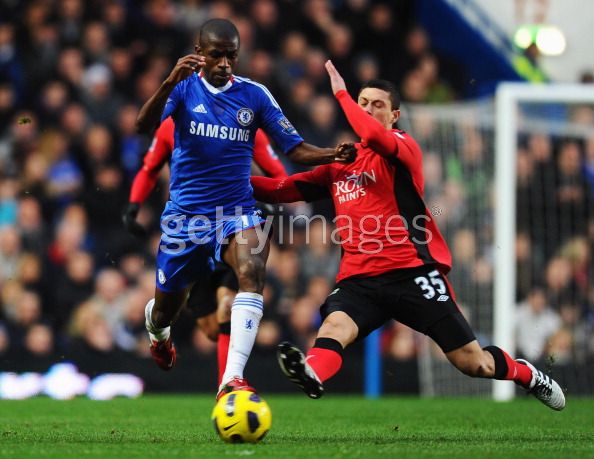 Immune to the criticism

The Rundown
• Team selection. What the fuck? Ancelotti spent the better part of the week speaking about how well our younger set had done against Ipswich, and that many of them were ready to start regularly in the Premier League. He's lauded McEachran all season. What does he do then? What he does best, avoid change at all costs. Today's starting XI was pretty much what we've seen ever since this dreaded run of form began. Pitiful. McEachran and Sturridge deserved starts. They have, for the most part, impressed whenever they've seen the field this season. They did so again in the trouncing of Ipswich. The core of our first team has struggled mightily. Seems like an easy decision then. Someone like Sturridge must be on edge right now. He had scored seven goals in two games while most everyone in front of him had been in hiding, particularly Drogba. Does he get the call? Negative. Hell, he doesn't even get an early sub in. No, overlooked for Kalou - Kalou? - and handed four meaningless minutes at the end. Insulting. As for McEachran ...
• A young Pirlo? Maybe. The kid once again impresses. So comfortable on the ball, it's ridiculous. Of course Blackburn were in shell mode, allowing him time on the ball, but the way he uses that time suggests something special. How very different we looked once he, and to be fair Salomon Kalou, were introduced. We had gradually improved as the second half progressed, but there was so much more vibrance about our play with Josh involved. How Michael Essien, who again was largely anonymous, has held onto his starting place is beyond me.
• Drogba, spent force? I'm sorry, but perhaps malaria not only has robbed him of his health but has also initiated the aging process. The man had staved off age for so long, but not it looks like he is laboring all the time. There wasn't just the the one glaring miss, either. Anelka sent Drogba through on goal early in the first half, the kind of chance the Mighty One usually devours. This time, he was run down by Gael Givet. Gael Givet. Not exactly the Premier League's quickest defender. It really was shocking to see that, but not entirely surprising considering how things have gone recently for the Ivorian. The effort, like I said, appears to be there. It's the physical limitations that are truly worrying.
• Ramires. A real pleasure to watch. Our best player of the opening 45 minutes, Ramires gave us what we usually expect Essien to provide at this point of the season. It seemed like he won every challenge he entered in those early exchanges and was definitely unlucky not to open his account at the club. Faded during the second half, but has really come on massively over the past few weeks. To think he was being ruthlessly lambasted early in the season. Well done to the lad for sticking in and not allowing the criticism to affect him. Surely a must-have on the team sheet from now, even when Mikel returns.
• Bane. Player of the season. Chelsea legend. Potential future captain. Give him a new fucking contract, suits.