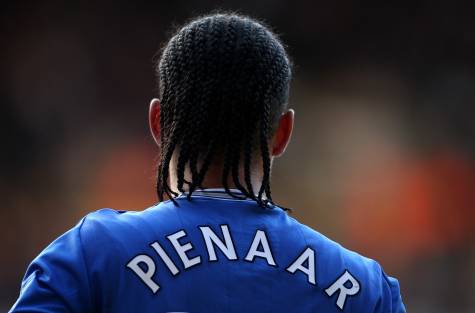 It looks as if Chelsea has missed out on another potential target. This summer, according to several sources, the club turned down the option to sign Rafael Van der Vaart from Real Madrid. Tottenham wasted no time sweeping in to complete a deal for the Dutchman, who has since brought not only superb scenery to England, but also world-class talent. Well done, Gourlay.

Now, I guess we've lost the chance to pry Steven Pienaar from Everton this January, agreeing a transfer fee with the Toffees but failing to agree on a contract with the 28-year-old South African. Well, shit.

Everton manager David Moyes opened the day with this quote: "We have had two offers and one of those has been accepted. We have allowed his representatives to speak to the other club, but whether it goes through or not I don't know yet."

It closes with Spurs again in position to sign another very solid player. I mean, what the hell? They really are compiling a pretty damn good squad over there. Fuck.

Of course, Pienaar wasn't the kind of wow signing many of us were looking for. But it would have been a shrewd, sensible one. A versatile attacking player, proven in the Premier League, with the ability to both score and create. For three million pounds? Hard to argue against making that move, my friends.

Then again, I don't know what kind of money Pienaar was seeking. The club's decision to opt for a more stricter wage policy has been lauded here. Still, I find it hard to believe this guy was holding out for 75-80K per week. Whatever, though.

I just hope the club have some real, concrete targets. And actually pursue some of them before the month is over.