Cast your minds back to this time last season. Chelsea were, as we are now, sitting at the top of the table with maximum points after three games, scoring seven goals and conceding two. While the results may have been similar, the Blues played with a completely different style in the early going of the 2009/10 campaign than they have to date this year. While we're now thoroughly entrenched in an attack-minded 4-3-3, Chelsea started last season with a 4-4-2 diamond midfield (hereafter called 4<4>2) that looked a little bit like this: 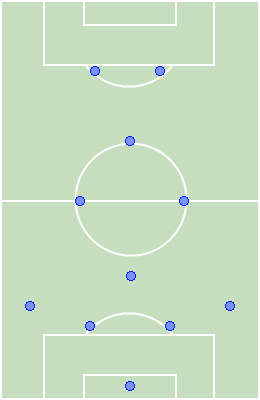 The first thing that springs to mind with the 4<4>2 is the total lack of width in the formation - the only two wide players in the entire field are ostensibly defenders. This means that both fullbacks have to produce all of the wide play on both attack and defence, putting a huge burden on their shoulders. However, the centre is completely locked up with Chelsea blue - against a two man central midfield, Chelsea can bring as many as four players to bear. In essence, the Blues concede the numerical advantage on the flanks to clog up the centre.

Is this a good idea? Well, it depends. It's hard to see why one would need to deploy four men in the centre of the midfield against two - you already are guaranteed a free player with three in the middle, and this way sucks up an extra player from somewhere else on the field. Playing two up front also allows the opposition to play a three-man defence, which is even more secure thanks to the lack of width in the team. The whole formation is too tight; too narrow - neutralise the fullbacks and all one has to do is stop Chelsea playing straight through the middle - difficult to do even with a midfield advantage.

Chelsea were forced away from the diamond due to injury - once Branislav Ivanovic replaced Jose Bosingwa at right-back, there was no way they could attack with any width at all. Ivanovic simply doesn't possess the attacking skills of his teammate (no great shock, since he is naturally a centre-back). This meant juggling around the formation somewhat to allow for some attacking width up top, hence the 4-3-3 that Ancelotti switched to for the rest of the year.

But what happens when Bosingwa is fit again? Do we return to the diamond? How do we deal with the fact that it's possible to neutralise the wide defenders simply by parking a winger up high and forcing them to stay home? Essentially, the 4<4>2 over-commits resources to the centre while neglecting width - in very much the same way that the traditional 4-4-2 places too much importance on the strikers and not enough on the central midfield. The system is adaptable, of course, and here's my best guess as to what a diamond would look like if Ancelotti fielded it this year: 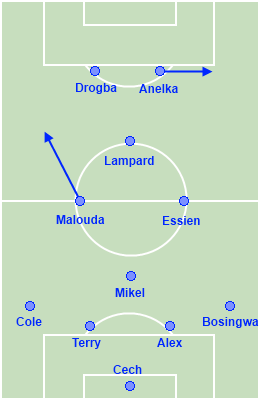 Note that Florent Malouda is more than happy to provide width on the left side despite his initial position in the centre, and should be able to take on some of the burden for Ashley Cole on the left. Meanwhile, Nicolas Anelka will be forced wide if Bosingwa finds himself tight up against a winger and unable to commit forwards without exposing huge defensive gaps. The scheme here would involve Didier Drogba occupying both central defenders, allowing Chelsea an extra man in the midfield - in this case Michael Essien combines with Jon Obi Mikel and Frank Lampard to form that most important of creatures, the midfield triangle.

Any of that sound familiar? It should, because it's our current shape with Jose Bosingwa inserted at right-back. 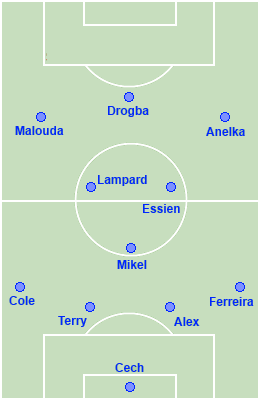 Ok, some of the positions are tweaked a little bit, but it's close enough to be obvious that the 4-3-3 as Chelsea play it is a natural response to the weaknesses of 4<4>2. By adding with to the forward line, the Blues take away their Achilles heel while still allowing the fullbacks to provide support on the attack. They lose some of their numerical advantage in midfield, but as most cases they're going against two men with three, there's not too much of a problem.

I found it pretty interesting that tracking through Chelsea's probable responses to other teams' counter-tactics to the 4<4>2 nets them with a 4-3-3 regardless of the capabilities of their fullbacks. Granted, the Blues moved to the 4-3-3 due to Bosingwa's injury, but as more and more teams started trying to peg their fullbacks down, they would have been forced to go down that route anyway, and probably dropped some points in the process.

Despite clearly being the best right-back on the team, Jose Bosingwa's absence seems to have pushed Chelsea into a new, more effective form - perhaps it was a blessing in disguise?