We have a shake-up at the top of the points list as Moussa Dembele's clutch brace against Wolves rockets him to the head of the table, knocking Craig Gardner off his post. Dembele scored in minutes 49 and 90, turning a 1-0 loss into a 2-1 win for the Cottagers. His efforts in salvaging the match were worth a whopping 2.89 points, almost half of Fulham's season total! Let's take a look at the leaders: 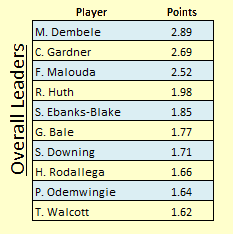 Stoke's Robert Huth also makes an appearance with his first goal, a last minute scrambled shot that broke the deadlock against Aston Villa and secured all three points for the Potters. His 1.98 points from Monday are good for fourth place in the overall standings despite not having been been a factor in any other match. Stewart Downing opened the scoring in that same match, and the Villa winger re-joins the list this week after a two-game absence. Downing, who scored the season's first goal (while offside, admittedly), was ranked eighth in the first edition of these tables and his excellent header to put Villa ahead in the Britannia has done him one better as he pushes ahead of Hugo Rodallega to sit in seventh.

Florent Malouda's streak of scoring in every match came to an end, mainly due to his usage as an 87th minute substitute in Chelsea's win over West Ham. Malouda has a chance to get back on track with a home game against Blackpool on Sunday - an early goal there will surely get him to the top of the table. Now let's look at our trailers. 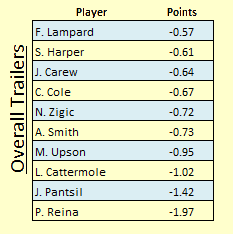 Last week I lamented that everyone at the bottom of the list was there due to a penalty or an own goal. Sunderland's Lee Cattermole has thankfully thrown his name back into the mix after he picked up his second red card of the season against Wigan, and he becomes the third player to break the minus-one point barrier after Fulham's John Pantsil and Liverpool keeper Pepe Reina. The only other newcomer here is Alan Smith, whose foul on Luke Varney at the stroke of halftime on Saturday handed Blackpool a penalty and the winning goal.

Frank Lampard is still at the bottom, but it won't be long until the Chelsea midfielder drops off, I imagine. Scoring a goal this weekend would be helpful, Frank...