Tottenham Hotspur have their man as Rafael van der Vaart has been given the all-clear to join the club from Real Madrid. The last-minute transfer had looked in some danger of falling through as it was unclear whether or not Tottenham had completed the deal inside the transfer window or not, but the league has just announced that the Dutchman is clear to move to White Hart Lane for £8M.

This is unquestionably good for the Premier League. By quickly reinvesting some of the money that they've received for Champions League qualification on an unquestionably talented player, Spurs are solidifying their position as regular challengers for fourth. This brings us up to a 'big six' at the very least, with each of Chelsea, Manchester United, Arsenal, Manchester City, Spurs, and Liverpool harbouring serious hopes of qualifying for Europe's most prestigious competition each year. Van der Vaart a clever purchase that indicates that the top four being broken up last year is not merely a blip but the start of things to come - and as long as we're not Liverpool fans I think we all have to feel good about having more excitement in our lives.

What sort of player are we talking about with van der Vaart, anyway? He had a few chances to play in the World Cup, but failed to impress, primarily due to his being played out of position on Holland's right wing, eventually being replaced by Arjen Robben. For most teams, this never would have happened, but Wesley Sneijder was already fulling the role of midfield playmaker - few would fault van der Vaart for being able to unseat him. So we have a player in the Sneidjer mould, a central attacking midfielder with an eye for a pass, a dangerous shot, and no sense of defensive responsibility whatsoever. His key role would be to link up play between the holders and the forward players while occupying the opposing midfield enough to give the likes of Tom Huddlestone more time to pick out a pass. However, he's not going to be playable in a traditional 4-4-2, which might make things interesting. Essentially, van der Vaart is inconsistent enough that if Tottenham put him in a position to fail, there's a good chance that he will.

We saw a reasonably similar (but inferior) player go to Aston Villa, stalwarts of the 4-4-2, in the James Milner deal, and when Stephen Ireland was simply dropped into Milner's position, the team fell apart. A two-man central midfield simply cannot cope with the opposing team if one of them is either disinclined towards or incapable of tracking back. When the centre is overrun to that extent, bad things typically happen. In Wilson Palacios, Tottenham have a more capable defensive midfielder than do Villa, but then accommodating both Huddlestone and van der Vaart becomes difficult, and that's not even mentioning Luka Modric.

If Harry Redknapp is going to play his best team while sticking to something vaguely like 4-4-2, he might do well to convert Gareth Bale into a wing-back and stick van der Vaart as a left midfielder, in the sort of role that Gerrard plays for England. His drifts towards the centre of the pitch will both open up space for and be covered by the onrushing left-back, while the other half of Tottenham's formation will end up relatively unchanged. Playing such a lopsided formation seems to me to be pretty much the only way the new signing will work in Spurs's usual system.

Of course, if Tottenham go to something more interesting, things look a little different. There is no real reason that Tottenham could not include all four of Modric, van der Vaart, Huddlestone, and Palacios playing fairly centrally - all that's required is to ditch that second striker, which is something Redknapp might want to look at anyway, since it lets teams play a three man defence (and therefore overload the midfield) against him. A 4-3-3 seems like a reasonable option, and one that looks legitimately scary: 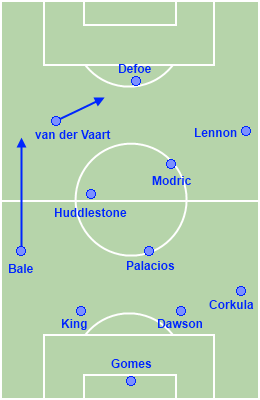 Of course, that's assuming van der Vaart fits in in England. He's been a little inconsistent so far in his career, and the speed and physicality of Premier League football might surprise him after years in Madrid. but when an unsettled player is sold at such a low price (he'd been ready to go to Bayern Munich for £18M the day before, but that transfer collapsed), Tottenham were right to take a punt. What remains to be asked is whether they change their shape to fit van der Vaart, who is probably now the best footballer on the team. If they don't, they're probably wasting a golden opportunity.