The what: FA Charity Shield – Chelsea v. Manchester United
The where: Wembley Stadium (90,000)
The when: August 8, 3pm local time (10am EST)
The how: Fox Soccer Channel (DirecTV 619, Dish Network 149)
The why: Because we desperately - well, maybe not desperately - need a positive result. Last season's capturing of the so-coveted Shield, via penalties, was an excellent springboard for what proved to be a historic season. There is no reason a similar outcome cannot do the same this term. 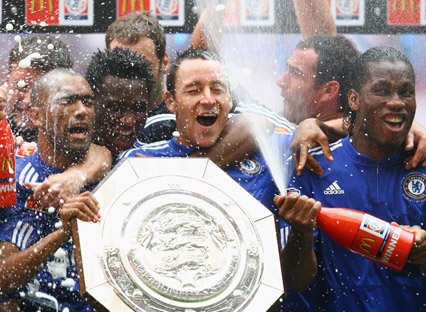 More of this please.

Key Matchup:
Nani v. Paulo
Help me. Please. The nightmare that was Gareth Bale - see 17 April 2010 - continues to replay in my mind when I contemplate Ferreira attempting to quell the Portugese winger. It's just not good.

You would think Paulo was in his mid-to-late 30s, what with the lack of mobility that has suddenly plagued the Portugese fullback. Then you find out he's just 31. Wow.

One would have thought a central partnership of Carvalho and EBALJT would have been preferred, with Bane on the right side of defense. Carlo Ancelotti obviously did not see it that way. Perhaps this says more about the potential transfer of Ricky (to Real Madrid) than anything else. Who knows.

It's a moot point. Paulo is in, and we can only hope he can issue a competent performance. 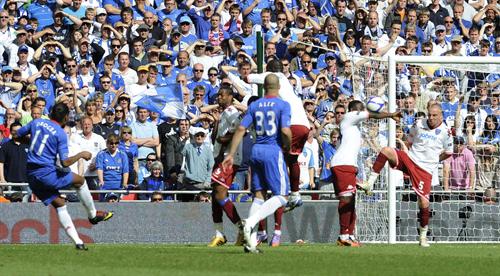 Drogs, scoring another at Wembley.

He's not entirely fit. He's not going to start. So what. This man, more likely than not, will prove to be the difference.

The Mighty One adores New Wembley. So much so that the large Ivorian has netted six times in seven appearances at the site of English football's traditional curtain-raiser - a strike rate of uncanny masculinity. It's almost as if he envisions the Arsenal each time he steps onto the storied field.

Quote:
"I think that for both teams it is an important game, because it is a very important check for the season and we want to look how our condition is, and also because against Manchester United is never an easy game. We want to do our best - Manchester United could be the most important opponent this season, like they were last season. For this I think that we need to come back to win because we lost too many games, friendly games, but we are not happy to lose. We have to come back to win and start well." -King Carlo

Love the perspective. This is hardly a must-win scenario, sure. But, seriously, who wants to lose - particularly to a chief rival? Well done, Carlo.

Prediction:
Difficult call. United is certainly further along in terms of preparation. Form as well. Is it wrong that I am already envious of El Chicharito? Ferguson's men to control much of the match, yet I'll back our boys to somehow carve out a cagey win. How will it happen? Haven't a clue.