Florent Malouda moves up a spot in the rankings with yet another crucial early goal, continuing his streak of being the only player in the league to have scored in every week. However, it's not quite enough to unseat Birmingham City's Craig Gardner, whose outstanding performance in week two was supplemented by a goal in Birmingham's 2-2 draw at Bolton. There are plenty of new faces amongst the leaders and trailers this week, so let's take a look: 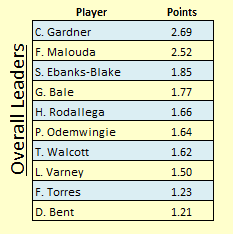 Malouda is nothing if not consistent - his PE+ per week reads 0.71, 0.96, 0.85 - and that's good enough to get the Chelsea man to second spot. Meanwhile Sylvan Ebanks-Blake has now matched his goal tally from last year in August, and both of them have been huge. His strike against Newcastle was worth almost a point for Wolves. Hugo Rodallega's first contribution to Wigan Athletic was to almost single-handedly beat Tottenham, and he accounts for more than 50% of his team's total points with his 80th minute match-winner on Saturday.

Theo Walcott's opener against Blackburn couples with an impressive showing in week two to push the Arsenal winger into 6th, while Luke Varney and Fernando Torres both make the top ten with second half tie-breaking goals. Darren Bent's penalty against Manchester City was enough to send him into tenth spot. Gareth Bale and Peter Odemwingie managed to stay at the top despite no contribution from either player last weekend. 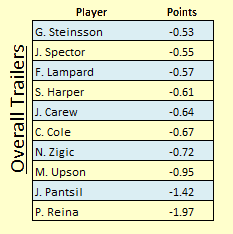 Once again, nothing could quite top Pepe Reina's last minute own goal against Arsenal in the first week, but Fulham's John Pantsil gave it a go when he scored an own goal for Blackpool's equaliser in what ended up as a 2-2 draw on Saturday. Frank Lampard and Jonathan Spector are the other newcomers to this list, with Spector responsible for giving away a needless penalty against Manchester United and Lampard failing to convert a 10th minute spot kick against Stoke. I'm inclined to give Frank the benefit of the doubt on account of him playing through a hernia, but next time he feels like doing that how about giving the ball to Didier Drogba? Spector's offence is also forgivable, because he's terrible and it's not his fault people keep telling him to go out and play football.

It's interesting that every player on this list is there for missing a penalty (John Carew, Frank Lampard, and Carlton Cole), conceding a penalty (Nikola Zigic, Steve Harper, Jonathan Spector, and Gretar Steinsson), or scoring an own goal (Matthew Upson, John Pantsil, and Pepe Reina) - there are no longer any red cards in the bottom ten. It remains to be seen whether players with poor discipline can catch up to their unlucky peers, as being sent off seems far more repeatable than scoring freak own goals.