Not too many movers in this week's table, but the big winners are Arsenal, who scoot up to third at Manchester City's expense. With Liverpool so far behind them, Tottenham Hotspur don't suffer a drop in the standings after their shock home loss to Wigan, but they're now far closer to the Europa League group than the Champions League. Everton's loss to Aston Villa drops them behind Newcastle United, who more or less held steady. At the very bottom of the table, Bolton take advantage of Stoke slipping up by drawing against Birmingham City, a result that sees them jump two spots. Meanwhile Wigan have begun to close the gap between themselves and Blackpool for the bottom spot, the deficit narrowing to four points from one. 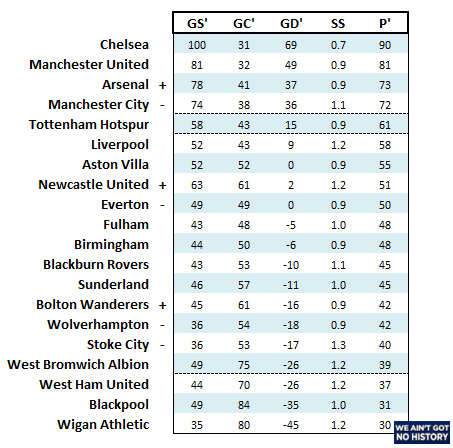 More detail after the jump.