This match wasn't tactically thrilling, but it did show how well Tony Pullis's side reacted to some glaring weaknesses in Chelsea's play. Chelsea lined up in their typical 4-3-3, but it was clear from early on that Didier Drogba, Nicolas Anelka, and in particular Frank Lampard were not having the best of days. Chelsea reacted to this by channeling as much play as they could to Ashley Cole on the left or using Michael Essien as a battering ram down the right, which worked well enough to generate a host of chances without the home side playing anywhere near their fluid best - for that they absolutely require both shuttlers in the second band (i.e. Lampard and Essien) to be on top of their game.

Stoke were playing an extremely defensive 3-2-3-2, with three central defenders tasked with picking up the Chelsea forwards and wing-backs supporting the back three. One has to imagine that Stoke remembered all too well the 7-0 defeat last April and were already in damage limitation mode. Fielding five defenders was never going to lead to goals away at Stamford Bridge. The starting team shapes are shown below: 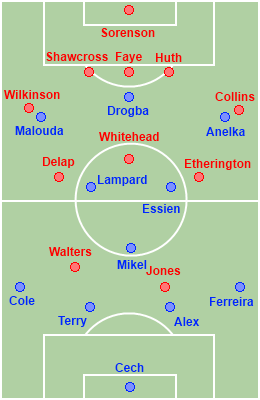 Chelsea's inability to link up with the midfield and attack and subsequent focus on fullback play actually caused Stoke some serious problems, as Andy Wilkinson did not appear to understand how to combine his role as a wing-back with the task of marking Ashley Cole. Wilkinson was routinely caught out far too high up the pitch allowing Cole to get in behind Stoke's back line. Wilkinson was at least partially responsible for the opening goal, although that was to do his with lateral movement rather than vertical as he failed to adequately track Florent Malouda's inside run. Danny Collins was having more joy down the Potters' left, with Paulo Ferreira unable to provide much forward pressure. The link between Collins and Etherington looked particularly troublesome, and Michael Essien was forced slightly backwards to combat the threat down Chelsea's right.

While Frank Lampard's injury severely hampered Chelsea's ability to go forward, it was an injury to John Terry which completely changed the tone of the game. Terry had aggravated a hamstring problem with a lunge on Rory Delap, but with injuries to both of Chelsea's backup central defenders he was forced to stay in the game. Terry's lack of mobility opened up huge holes in the back of the Chelsea lines, and Stoke's response was to come crashing forward in search of a goal. The 3-2-3-2 became a standard 4-4-2, with Wilkinson replaced by central midfielder Glenn Whelan (see below). Stoke found Chelsea relatively easy to contain after that, primarily because Ashley Cole could no longer go bombing forwards without leaving his defence horribly exposed. The addition of Whelan to the middle also allowed Stoke a brief period of dominance, culminating in the Irishman's rocket of a shot clattering the underside of Petr Cech's bar from fully thirty yards. Attempts to get much closer to the Chelsea goal were foiled by the combined efforts of Mikel and Alex, who covered excellently for his limping captain. 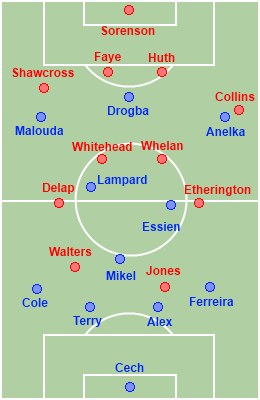 Carlo Ancelotti replied with a personnel change rather than a tactical shift, with Lampard withdrawn for Salomon Kalou and Malouda pulled back to a deeper midfield role. Replacing Lampard, who was injured and totally ineffective, swung the midfield battle back towards the home side, and they were reasonably comfortable for the rest of the match - they were helped by Kenwyne Jones's forced withdrawal, which freed up Mikel to provide slightly more support upfield. The second goal, which came from more or less nothing, killed Stoke's resistance entirely as their shape crumbled under pressure from Kalou and Daniel Sturridge.

All in all it was an interesting demonstration of adaptation from both managers. Stoke were very nearly able to capitalise on poor games from John Terry and Frank Lampard after they switched to a shape that wasn't focused on avoiding a 7-0 thrashing, but Ancelotti's response and a healthy dose of luck helped Chelsea stay in front and maintain their so-far perfect record.