Dider Drogba - Are The Assists Legit?

Share All sharing options for: Dider Drogba - Are The Assists Legit?

I don't need to ask whether anyone else feels like Didier Drogba's been the main offensive force behind Chelsea's goal blitz to start the season - you guys have voted him man of the match in both games so far. With three goals in the first game and a hat-trick of assists in the second, he looks to be on unstoppable form. The goals are perhaps not too much of a surprise: Drogba scored 29 goals in league play and 37 overall last season, so he's hardly a stranger to the scoresheet. What is genuinely surprising is the assist tally. Not only is it relatively high (three in two games compared to ten all last season), it also appears to be actually underrating Drogba's total contribution to the offence.

I have to say that I'm not too fond of assists. I don't like them because they're hard to weight, and I don't like them because they pretend that goal-scoring moves have just two elements. So far this season, the official word on Didier Drogba is that he's contributed three goals and three assists in two games - an impressive figure, to be sure. But like I said, assists don't tell the whole story. Let's look at the twelve goals again, from a purely Drogba perspective:

Nine out of twelve Chelsea goals have involved Drogba in some way, and he's been an important factor in each of them. That's a full 75% of goals directly attributable to play by the Ivorian, a frankly stunning number when one considers how often his inability to link up well with the team has hurt Chelsea's play over the past few years. Drogba has seemingly always functioned best as the main man up front, and his ability to bulldoze the opposition, exploit the space exposed, and finish the chance has helped the Blues get out of a number of sticky situations. But for all his importance to winning games, Drogba's presence has never really been conducive to Chelsea racking up a lot of goals - until very recently.

But is he actually doing anything different? I had a hunch that his playing style has been slightly altered since his return from the African Cup of Nations last winter in order to accommodate the movement of his teammates a little more effectively. In order to test the hypothesis that his game has moved more towards the pass as of late, let's look at Drogba's completed passes per minute for all of last season as well as the for first two games this year. 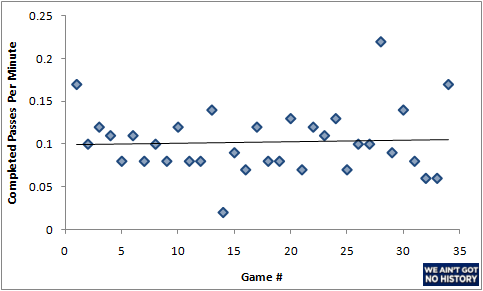 Looks like the answer is no, then. The trend line on that graph is essentially flat, and the average values pre and post Cup are barely different. Drogba hasn't gotten any more pass-happy that he was at the start of the season, which is to say not pass-happy at all. Compare his average, 0.10 successful passes per minute to, say, Mikel, who this season is averaging 0.62. It's probably unfair to be comparing a striker with a central midfielder, but even doing looking at a fellow forward doesn't help out Drogba's cause very much: His rate of 0.10 is still pretty poor compared to strike partner Anelka's 0.23.

As far as I can tell, Drogba's not exactly a changed man. This is good in a way - he can surely be counted on to score goals by the dozen - but for those among us who thought that three assists plus big contributions to two other goals last Saturday might portend greater things... well, I wouldn't hold your breath on that one. Unless he has a sustained assist streak, we should expect to seeing our target forward at the end of things rather than heavily involved in the buildup.