Did you know that there has been exactly one player with a goal in both weeks of the season so far? That man is Chelsea's Florent Malouda, who scored the opener in both the West Brom match at home and the Wigan Athletic match away, and so has earned himself a robust PE+ score of 1.66. Unfortunately for the Frenchman, that wasn't enough to get him to top spot on the overall leaderboards due to some fine individual performances in week two: 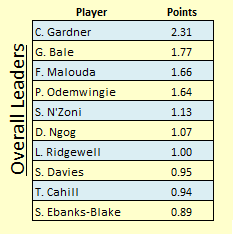 Craig Gardner blows everybody out of the water by being worth more than two points for his brace in Birmingham's come-from-behind win against Blackburn. His effort was by far the 'clutchest' performance of the young season, beating out Gareth Bale's 1.77 by little more than half a point. The Welshman's efforts against Stoke are not to be undervalued, though, and his two first half goals place him at number two on the week and overall.

Peter Odemwingie's 81st minute goal to break the deadlock at the Hawthornes against Sunderland was worth 1.64 points on its own, so far the single highest point swing for any individual goal. He ranks third on the week two chart and fourth overall, just behind Malouda. The other newcomers to the leaderboard are Steven N'Zoni, Tim Cahill, Sylvan Ebanks-Blake, and Simon Davies, with David Ngog and Liam Ridgewell the holdovers from last week.

How about the other end of the standings? 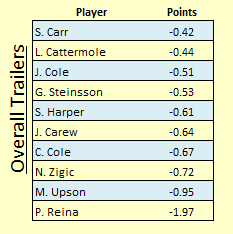 Nobody could quite manage to knock Pepe Reina off his less-than-lofty perch, but Matthew Upson came the closest with his own goal against Bolton on Saturday. The rest of the major additions are to do with penalties: Nikola Zigic gave up a penalty against Blackburn with the game tied 0-0, Carlton Cole missed a penalty for West Ham against Bolton (Gretar Steinsson the culprit) with the score even, and John Carew also missed a penalty after Steve Harper brought Ashley Young down in the box early in the Newcastle-Aston Villa match. Nobody down here's really been setting the Premier League on fire.