Now that all of this week's games are in the bag, let's see what happens to the power rankings. Remember that these results are a Bayesian combination of my preseason projections and actual results, with a strength of schedule adjustment.

Update: Now with correct math. The spreadsheet was weighting this season's goals scored/conceded as double the intended value. This is a deeply embarrassing mistake, but it's been fixed; please refresh the cache to see the correct table. 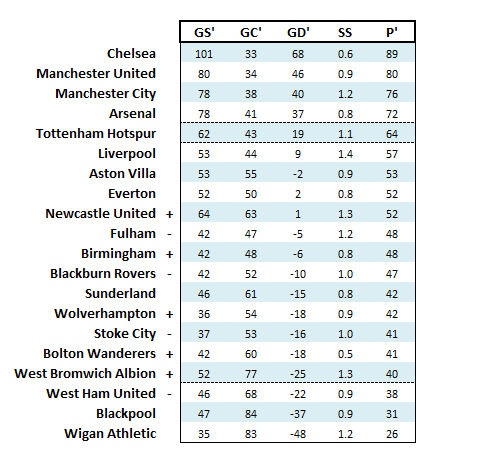 Chelsea's margin at the front increases to nine points thanks to the romp over Wigan and United's draw at Fulham. The Blues have had by far the easiest schedule so far, playing (and destroying) two teams out of the bottom four. Meanwhile, Newcastle United jump up to ninth - it's not every time a team demolishes Aston Villa, after all, and they're now on pace to challenge for the Europa league spots. Although Villa suffered badly at St. James' Park, they should be in relatively good shape going forwards and still remain 7th.

At the bottom of the table, Wast Bromwich Albion find themselves out of the relegation zone thanks to a win over Sunderland and West Ham's appalling performance against Bolton, who are now three points clear of the drop. Wolves are our other risers, their draw at Everton combined with Stoke losing at home seeing them semi-solidly in mid-table.

There were a lot of strange scores this weekend, and the Newcastle-Villa result had a huge impact on the rankings. The other 6-0 scorelines happened to the bottom teams in the table, meaning that they had relatively little weight, but beating a consensus top-10 side by that score is a big step for the Magpies, even if Villa were dire at St. James' Park.