It was another tale of two halves for Chelsea. Like last week, the team lined up in 4-3-3 - the only change in personnel being the inclusion of Branislav Ivanovic for Paulo Ferreira, who had a tough time against West Bromwich Albion. Again, one of the bands played in the (apparently) wrong shape for much of the first half, but against Wigan it was the forward trio of Florent Malouda, Didier Drogba, and Nicolas Anelka who were mostly at fault, the first two far more so than the last.

I'm not putting the blame for a fairly miserable first half performance on their shoulders, mind you, because they were simply reacting to the poor technical play of their teammates, but it's instructive to see the impact of that reaction on Chelsea's overall ability to play the ball through midfield.

In the first half, Frank Lampard and particularly Michael Essien were having trouble completing passes, and Ivanovic was having a nightmare at full-back, routinely giving the ball right back to a Wigan player. Ashley Cole was stymied by the presence of Charles N'Zogbia, who played almost on top of him for much of the first 45, and therefore unable to get forward to support Lampard and provide another outlet. As a result, Chelsea's ball retention suffered, which meant holding midfield Jon Obi Mikel was pushed deeper to break up Wigan's (fairly weak) attacks, costing the Blues yet another player to pass to when Lampard or Essien were put under pressure.

Instead of waiting for their teammates to settle themselves, Drogba and Malouda dropped back to contest the middle. This had the effect of bringing even more Wigan players into close proximity with Lampard and Essien, furthering their gameplan of putting intense pressure on the two distributors, and being packed together like sardines in the centre hurt the passing of all four players. Only Nicolas Anelka had the discipline to stay wide and wait, but his efficacy was hurt by the fact that whenever he found himself in space, there was nobody to support him and he had to hold up the ball until the Blues could move into their correct positions. Hold-up play is hardly the Frenchman's specialty, and he far prefers playing quick, one-touch football, but he simply had nobody to pass to. 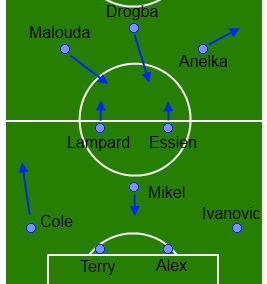 You can see why Chelsea were being overwhelmed as soon as they got into the Wigan half. With Wigan playing a 4-2-3-1 they could commit as many as five midfielders plus the two centre halves to harass Chelsea's four-man centre, and they typically had a one-man advantage there at all times. The squashing of play also favoured Wigan's less skilled players, turning the midfield contest into a game of luck and reaction - one which the team with the numerical advantage will almost always win. What changed in the second?

After the goal - indeed, during the buildup to the goal - we saw Malouda return to a wider (but still withdrawn) position, forcing a wide midfield to pick him up. Wigan's confidence also dropped a little, allowing Mikel to advance, destroying the advantage that they had in the centre. Lampard and Essien suddenly found themselves with much more space, and with it came an improvement in their passing accuracy and movement. With Chelsea suddenly retaining the ball far more effectively, Ashley Cole was free to move further forward, and although Ivanovic's forays into the attack were limited, Chelsea's shape looked far more familiar: 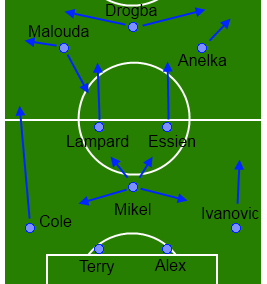 How much nicer is that? As usual, due to the presence of Ashley Cole, the Blues were a little lopsided in the attack, preferring to attack down the left flank. Mikel held the ball extremely well this half and his presence let Lampard and Essien throw off the shackles and march forward, feeding the forward band much more effectively. Drogba, ostensibly playing as a centre forward, repeatedly made his way to the flanks, which left Wigan far stronger in the centre but also left them 2 vs. 3 defending the left side on multiple occasions. Crosses from the left resulted in two goals in the second half as Wigan crumbled.

It's good to see that Mikel and Essien learned their lessons from the last game, and it's hard to blame Malouda and Drogba for trying to support their teammates when they were in trouble. However, the cure merely exacerbated the illness, and it took a goal quite massively against the run of play to get Chelsea to settle down into their normal system. Once they had a lead, they were just too much for Wigan, and two early second half goals by Anelka sealed the deal.

One final note: After the game, Carlo Ancelotti pointed out that the amount of pressing Wigan had done in the first half had left