The what: Premier League, Round 2 – Wigan Athletic v. Chelsea
The where: DW Stadium (25,138)
The when: August 21, 5:15pm local time (12:15pm EST)
The how: Fox Soccer Channel (DirecTV 619, Dish Network 149)
The why: Because revenge is a dish best served by the Drogs. Last season's visit to the DW resulted in a shock 3-1 defeat, Carlo Ancelotti's first as Chelsea manager.
The referee: Mike Dean 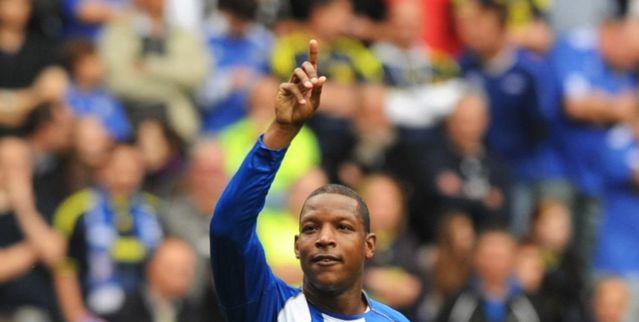 At least there will be none of this man.

The stat: A third successive hat trick. Didier Drogba could become the first player to accomplish the feat since Jack Balmer, of Liverpool, did so the year following the second World War. Yeah, that's a while. The Mighty One would be just the fourth player ever to collect a hat trick of hat tricks in the English top flight.

Wigan —
Position: 19 (0 points)
League Form: L
Team: Kirkland, Gohouri, Boyce, Stam, Figueroa, Alcaraz, Watson, Diame, Thomas, McArthur, McCarthy, Rodallega, Boselli, Scotland, Gomez, Golobart, N'Zogbia, Al Habsi
Doubtful: None
Injured: Moses (calf), Caldwell (hip)
Suspended: Caldwell
Leading scorer: Nobody.
Quote: "Chelsea in my eyes have the strongest squad in the league, but we're ready to react from our disappointment and be competitive in a game why showed last season we're capable of winning. They've been working together as a squad for a number of seasons and have had tremendous results. Everything you look for in a successful team; experience, strength, power and quality they possess in big amounts. You need to be at your very best to compete with that, but our game against them here last season shows we are capable of performing against such an opponent. To do that we need to be perfect in everything we do, learning lessons from last weekend's game."
-ESPN analyst Roberto Martinez 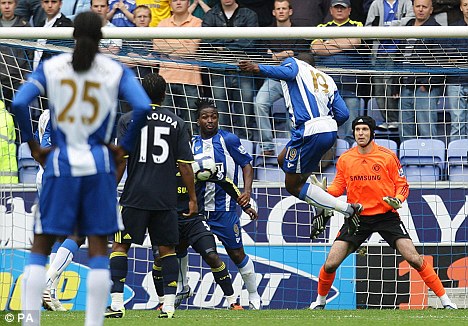 Man, to be Roberto Martinez. This team of his is shocking, in both senses of the term. Ravaged by a top-flight debutant featuring a half-fit journeyman? Not good for morale. Welcoming a team who has combined to win its past four league matches by a score of 23-0? Even worse.

Then this is Wigan. The same Wigan that handily defeated us at the DW early last season, then were pummeled by eight goals without reply on the final day of the term at Stamford Bridge. The same Wigan that conceded nine to Tottenham, then shocked Arsenal late in the term. Baffling.

With that being said, the linchpin of the Latics' water-tight defense of yesteryear is no longer available. Yes, the legendary Titus Bramble has moved on to Sunderland, and can no longer torment the Chels. A sad day when Titus Bramble is referred to as a linchpin.

Gary Caldwell, who was the opposite of sensation in last season's final fixture, will not be available for Martinez. Superb news for Wigan. Worse news? Roberto will have to field Ben Watson in the middle of the park against our formidable three of Lampard, Mikel and Essien. He may not want to, but Roberto must call on want-away winger Charles N'Zogbia. He desperately needs his creativity and guile.

Chelsea —
Position: 1 (3 points)
League Form: W
Team: Cech, Hilario, Turnbull, A. Cole, Terry, Ivanovic, Alex, Ferreira, Zhirkov, Mancienne, Van Aanholt, Kalou, Drogba, Malouda, Lampard, Essien, Mikel, Benayoun, Anelka, Sturridge, Borini
Doubtful: None
Injured: Bosingwa (knee), Bruma (hernia), Kakuta (back)
Suspended: None
Leading scorer: Drogba 3
Quote: "I am sure it will be a different game tomorrow, the last game at Wigan we lost 3-1, and for this reason I think we have to prepare well for this game, above all mentally. I will be happy if we can win just 1-0. It is important to have a clean sheet, it is important to score when possible but this is not football, to win 6-0 or 7-0 cannot happen every day. It is important to win, to play well, and if possible to score. We have to pay attention, they started bad, lost at home against Blackpool and they want to be strong, to have power tomorrow, to do a different match. We have to pay attention because they have quality and skills in front. We had problems last season, it was our first defeat and now we want to continue, we started well, it is important to have a good start, not just one game but also the others. Last year we won the first games and we want to do the same because it is important to start well."
-King Carlito

Time to continue where we picked off last Saturday afternoon.

As mentioned earlier, we have scored 23 goals in our last four competitive fixtures. The defense hasn't been too shabby, either. Chelsea is at 406 minutes since they last conceded a Premier League goal, in that debacle at White Hart Lane in April.

Ramires has been in training, but is unavailable for this weekend. Carlo reckons he'll be in line for a start next week against Stoke City. Good news. Not so good news is the lack of a fit Gael Kakuta. The young Frenchman is dealing with a back injury. Jeffrey Bruma was to undergo a hernia procedure today. Meanwhile, Jose Bosingwa - who I am dying to see back in the mix - is expected to return to training next week.

Other than that, the squad looks to be in very good health. Sorry, Roberto. You would think, with us brimming and Wigan nearing breaking point, an early goal could result in another avalanche. Yes, please.

Expect little change to the team that featured against West Bromwich. Branislav Ivanovic should replace Paulo Ferreira at right fullback if fit. Let the pillaging commence.

Wigan hasn't kept a clean sheet against Chelsea in 30 years. The Blues have won eight of their last 10 matches against Athletic. It's not looking good for the hosts. A focused, efficient display should make it six points out of six for the famous CFC. KTBFFH