Upset after missing out on Neymar? Don't be

Share All sharing options for: Upset after missing out on Neymar? Don't be

"It was a complicated and difficult decision. I'm staying at Santos and I'm very happy here and now I'm focused to win more titles. "Money doesn't just bring us happiness." 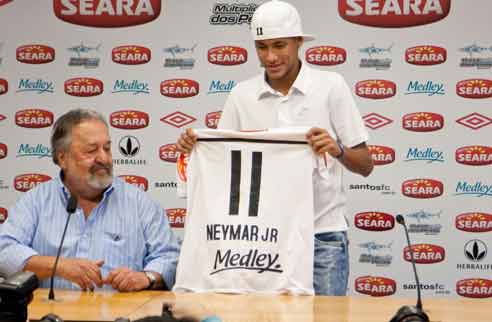 After weeks of prolonged speculation, we finally have our answer.

Neymar is staying at Santos. Well, at least until the end of next season's Copa Libertadores.

That press conference called for Friday? Yeah, it was actually held today. The dominant image of said media opportunity? Neymar gleefully clothed in the shirt of his home club. Propaganda at its finest.

Neymar agreed to an unprecedented deal in Brazil to remain with his boyhood club. His wage structure will be similar to that offered by Chelsea, rumored to have been £55,000 per week. An initial raise to £40K, triple his original salary mind you, was reworked in partnership with investors so as to meet our offer - similar to the precedent set with the Robinho loan deal, which included image rights for those partnering with the club.

The Daily Mail reports that, in addition to the landmark extension, Santos has recruited a specialist PR team with an aim in taking the Neymar brand global. Chelsea very easily could have done that, and without the public relations conglomerate; it's called the Champions League. But I digress.

Neymar will receive media training. A marketing team will also act in extending his reach beyond just football. It is no doubt an impressive and aggressive plan from the Brazilian club.

Even Neymar's agent, Wagner Ribeiro, who appeared to favor a move to London from the beginning of negotiations, was wowed by the presentation made by Santos: "The deal offered by Santos for Neymar is incredible. Viewed outside of Brazil, how it was arranged here with half the training and including all the assistance to the family. I've never seen anything like it."

So, another primary target rejects the Chels. Not exactly a shock, to be fair. Is it disappointing? Sure. Is it devastating? Hardly. 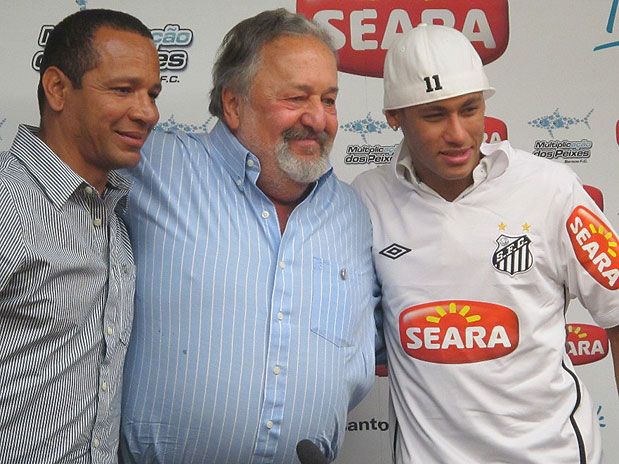 Let's have a look at why this isn't necessarily bad for the famous CFC:

The unknown(s)
• Not exactly high risk, but, at 18 years old and non-English, a risk nonetheless. Numerous question marks would surround such a signing. Among them: How will he adapt? Is he physically ready for the English game? How does he fit in? However unlikely, could we see a repeat of the Robinho debacle?

The price tag, £25-30 million, adds further scrutiny to any transfer. Then there is the question of whether he actually wanted to be at Chelsea. It's difficult to say, what with so much outside influence clouding the impressionable mind of the kid. And that's not even the half.

Let's just say that, while the transfer had the potential to be one for the ages, and may well have, if successful, eased the transition the club is fast entering, the potential for disaster was equally plausible.

The priorities
• While the addition of a Neymar would have been a progressive move by the club, most certainly, it was by no means a necessity. Neymar, to me, would have represented a luxury signing. A luxury signing with many unknown variables.

This side, while far from flawed, has holes. Holes that, I think, many of us would like to see filled before the end of this transfer window. A creative midfielder, for one, should be a priority. Would the club have sought such a player had the Neymar transfer been a success? I'm not so sure. And Neymar, for me, would not have represented an immediate fix. He's more of a project - with immense upside.

Neymar does represent creativity. Flair. Things this Chelsea side has generally lacked over the past several seasons. Yet, like mentioned earlier, Neymar is far from a certain. His rejection frees the club up to pursue other targets, and I'm certain there are several of them; hopefully among these targets, which Bruce Buck had ensured us are in the club's black book, is a creative fulcrum.

Then again, this is Chelsea. Who knows what is going on amongst the brain trust?

The youth
• No Neymar? Fine. That simply means more opportunities (hopefully) for this much-discussed, much-lauded group of youth products.

Hypothetically, no Neymar means more looks for the likes of Daniel Sturridge, Fabio Borini and, namely, Gael Kakuta. That being said, who needs a Neymar when you already have one of your own in Kakuta? It's a fair question, I think.

So, too, is what's better than Kakuta? Kakuta and Neymar, obviously.

Our reputation
• Our reputation in Brazil has already taken a hit thanks to this drawn-out mess. Think what would have happened had Neymar chosen London over Vila Belmiro? We could have been exiled for years, decades even. Well, everything except Fluminense.

Now I know that's a bit of an overreaction. But it's certainly not a reach to suggest the nation would have been none pleased with our transfer practices, and thus future deals with Brazilian clubs could have been affected by that fact. We may still be viewed as the devil in subsequent years, but I doubt we'll be iced out of the country altogether. I would even wager we have an excellent shot at landing Neymar in '11 or in the years to come - thought his new buyout clause, €45mil, represents a mighty stumbling block.

Take solace
• The Neymar soap opera, regardless of its outcome, represents a positive for the support in that we now know that the club is indeed willing to pursue high-profile targets - and willing to spend high-profile money in the process. Many have questioned the commitment of the hierarchy to improving the club in this aspect. I think that can no longer be even mentioned. Ribeiro admitted that Chelsea were in fact willing to match the buyout clause set in Neymar's contract (a number rumored to be around £30m).

We all must respect the club's stance regarding transfers. There is absolutely no need to spend simply to spend (c. Mancini). Well done, Bruce, Romes & Co. However, knowing that premium funds are available for premium product is encouraging.

Conclusion: Ideally, the club would have secured either first refusal on Neymar, or signed him outright and loaned him immediately back to Santos. It didn't happen. Not a catastrophe, by any stretch.

You've got to applaud the kid for realizing he still needs time to grow, and that period would be best spent at home. Unless, that is, this whole spiel was just to get a raise. Forgive me, that's just the cynic surfacing.

Regardless, there are numerous options for a club of this stature. We move on. We've done it before, we shall do so again. I don't think our business in this window is done. I may be wrong; we will find out in 11 days.