Update: Now with the correct league environment! Blame the Seattle Sounders for that little gaffe.

No, this isn't about teams. One of the great things about having values for win probability is that we can now convert goals and red cards into points gained or lost. Not all goals are created equal, and this gives us a way of measuring how important a sending off was compared to a last minute own goal, say, or a goal in the sixth minute vs. one in the 63rd while up by three.

In other words, it gives us a means of translating the languages of goals and sendings-off into one simple tongue that actually means something. At the end of the day, as far as the league table is concerned, all that matters is points won and lost (ok, goal differential matters too, but not nearly as much). Therefore being able to measure production in terms of points is exceptionally useful. I'm calling this statistic point expectancy plus (PE+), mainly because it needs a name.

Granted, we're failing to pick up the subtleties in the ebb and flow of the game here, but that's ok. When we quantify the value of a phenomenal pass which the striker wastes, or a brilliant save by a goalkeeper, we can bolt that onto this framework. What matters here is that there's something to build off in measuring players. The more baseball stat-savvy amongst you will note that this is handily in the context-dependent tree of statistics, one which I don't usually favour, but it's certainly a lot better than nothing.

With that in mind, here are your points leaders and trailers so far this season, based on goals scored and red cards only. 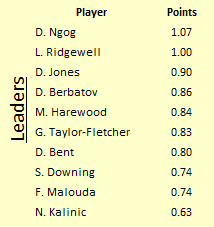 Marlon Harewood takes the prize this week for his brace away to Wigan, barely edging out Liam Ridgewell's dying minutes goal at 10-man Sunderland. Ngog's goal so soon after Liverpool had been reduced to ten men gets him 0.97 points, good for third place on the list. The lone Chelsea man here is Florent Malouda at tenth, the sixth minute goal he scored against the Baggies valued at 0.6 points (and he received zero for the 90th minute strike that made the score 6-0). Note: This is an illustration of how much league goalscoring rates affect things. The correct table is completely different simply by virtue of using Premier League scoring rates rather than the North American Champions League home/away goals scored.

David Ngog's goal just after halftime for ten-men Liverpool against Arsenal wins the prize this week, boosting Liverpool's point expectancy by 1.07. Meanwhile, Liam Ridgewell's dying-minutes goal to equalise against Sunderland earned Birmingham a point, making him the only other player to reach +1 so far. David Jones's exceptionally taken free-kick is third on the list, while Chelsea man Florent Malouda sneaks in at ninth for his sixth-minute goal against West Bromwich Albion (he receives no credit for the 90th-minute goal that made things 6-0).

Two own goals bracket a pair of red cards on the negatives list, with Pepe Reina's howler against Arsenal costing his team almost two points in the standings - and considering that two points by the Reds would have seen them in sixth rather than seventh last year, that's a fairly big deal. Stephen Carr's own goal cost Birmingham City nearly all the momentum Lee Cattermole had given them by being sent off, while Joe Cole's lunging scissor tackle meant the Anfield debutant cost his new side almost half a point on the day.

There'll Wigan preview later today, so soon I'll finally have something purely Chelsea-related to talk about!