There's not really much going on with Chelsea until the match at Wigan on Saturday, so I thought I would share the results of some quick and dirty research about the Premier League teams that have been the biggest thorns in Chelsea's side over the years. Measuring this is pretty easy: just sum up points dropped against each team since the inception of the league in 1992. Instead of looking at every team, I just grabbed data from those that have not been relegated from the top flight since the 1992/1993 season, when the Premier League was formed. Let's have a poll first though: Who do you hate to face? 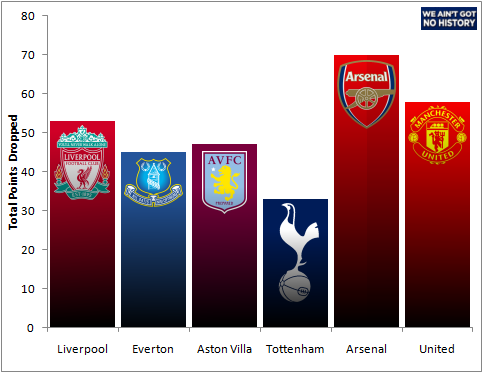 Amazingly, Spurs are not only the worst of the six, but they're also beaten fairly comfortably by both West Ham United (who gave Chelsea a lot of trouble in the 1990s) and Newcastle United, two teams who've spent multiple seasons outside the Premier League fold. Over the past two decades, Chelsea's performance against Tottenham Hotspur has been nothing short of extraordinary. Everton, Aston Villa, and Liverpool are fairly tightly bunched, with Liverpool getting most of their points against the Blues in the early days of the league. The Toffees and Villans are starting to catch up now though, as the gap between the so-called 'Big Four' and the rest of the teams begins to tighten.

We may have caused Manchester United the most headache out of any team in the past twenty years, but they've certainly given as good as they've received in the rivalry, taking 45 points to our 38 against them in Premier League play. However, they're comfortably bested as Chelsea's bogey team by Arsenal, as our fellow London club have denied the Blues a whopping total of 70 points in 16 seasons, averaging just a little worse than a win and a draw against Chelsea every year. Ouch.