Remember the predicted season table I introduced last Friday? It's relatively trivial to tell the spreadsheet that produced that to include results from matches and then weight performances in the season to date in its predictions, so that's exactly what I've done here in the inaugural We Ain't Got No History power rankings. I've also included some strength of schedule adjustments, mainly to stop poor West Bromwich Albion fans from being too sad about going down 6-0 to Chelsea. 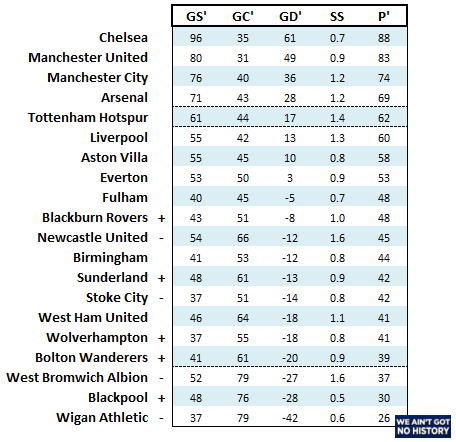 Chelsea are in front by a healthy margin, and things don't really shake up until mid-table, where Blackburn's victory over Everton put them into the upper half. Stoke City's loss to Wolverhampton really hurts them, as Tony Pullis's team falls all the way to 14th. West Brom's crushing defeat against Chelsea is enough to drop them into the relegation zone, pushing Wolves and Bolton up the list, while Blackpool's victory over Wigan gets them up to 19th, the Latics taking their place at the bottom of the table after the 4-0 thumping.

Notes on methodology after the jump.

The way these rankings were derived was by using simple Bayesian logic with Friday's table as our prior set of beliefs. Here's a basic example:

If we thought Chelsea were good for 91 goals before the season starts, and we saw them score six goals on Saturday, we might expect that for the rest of the season they'd be on pace to score (91*37/38+6*38/38)*37/38 = 92 goals for the rest of the season, plus the six they netted on Saturday for 98 total goals. However, since West Brom are a fairly weak team, Chelsea's Strength of Schedule (SS) is only 0.6, meaning that they're only going to get credit for four goals instead of six, leaving them with a GS' of 96.

Strength of schedule was determined by looking at expected points compared to league average, then applied to the GS'/GC' columns in order to reduce the impact of blowing extremely weak teams out of the water on opening day. Home and away games were not considered, but cursory research has shown that this may have a significant effect.

With all that in mind, GC' (and then GD') is relatively simple to calculate. For points, things are slightly more tricky, and it's important not to include the goals already scored/conceded in the projected points for the rest of the season (otherwise you are essentially double counting). However, it's not too difficult to work out, and from there applying these values to the rest of the league is simple, and we can sort by expected points, goal difference, and goals scored to get our power rankings.