With Stamford Bridge seeing several routs last season, I thought it would be interesting to see how the team did at home and away, using G-X, a statistic I introduced last week and eXpected - Goals Conceded (X-GC), the equivalent on the defensive side of the ball. Combine those two values and you get Goal Differential - eXpected (GD-X), a statistic that measures overall performance compared to that expected of an average team. I then sorted the values and marked home and away correspondingly on the graph below: 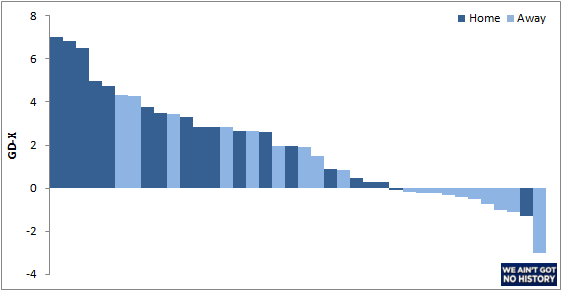 Interesting. Chelsea averaged +2.84 GD-X at Stamford Bridge compared to a relatively paltry +0.84 on the road, a two goal difference per game. Only two below average performances occurred at home, one the 4-2 defeat to Manchester City and the other the opener against Hull City (and that was barely negative). With 26 above average displays in total and only two poor results at home, Stamford Bridge saw 65% of Chelsea's 'good' starts. In contrast, away games account for 83% of bad performances by the Blues. With West Bromwich Albion being obliterated at the Bridge on Saturday, last year's trend has continued through the start of the season.

If I had more data (typing everything in by hand is somewhat tedious, and would be many times more annoying to fill in values for every game in the league last year), it would be interesting to see how the +2 result from Chelsea stacks up to the rest of the teams in the Premiership. It might even help in strength of schedule calculations, another piece I'm working on as we start to get things rolling with Premier League coverage.