A new season is upon us. It's hard to fathom, really.

Expectations at Stamford Bridge are high - as they have been since a certain Russian oligarch purchased the club in 2003. How high are they? Really ******* high. 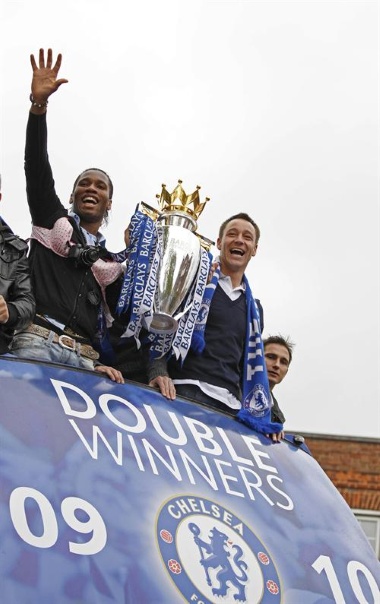 Manager Carlo Ancelotti is of the opinion that this edition can better last season's group in terms of success. A difficult task no doubt, seeing as how those boys secured the first league and cup double in the club's storied history.

"More? Maybe," Ancelotti was recently quoted saying in response to the question of whether this team could win more trophies than the two won last season. "I think that last year, we did the best. I think every player did the best possible. We want to do the same. We are able to do this.

Let's take a look at how the Chelsea Offside expects the club to perform in each of its competitions this season. Polls are included, because we want to know what you think - obviously. On with the show, then.

Premier League
It's a difficult ask to retain a title in any league in the world. That prospect is made even harder when you reside in England, and those around you include the likes of Manchester United, Arsenal, Liverpool, Manchester City - who would have thought? - and numerous others. Nevertheless, if any club is equipped to repeat in the Premier League, it's the the famous CFC.

Carlo Ancelotti is blessed with the strongest first team in England, despite growing concern surrounding his embattled captain. Adaptability is a chief issue. So, too, is squad depth, thought the return of a fit Michael Essien and the return, hopefully sooner rather than later, of Jose Bosingwa will hopefully curb such fears. The emergence of youth products such as Gael Kakuta will further bolster King Carlo's options - as will new arrivals Ramires and Yossi Benayoun. Then there is the possibility of further arrivals (Neymar, Luiz). Even without such signings, this team is built for success. A team comprised of winners wins, simple.
Prediction: Champions

League Cup
If Ancelotti is to be believed, this competition will serve as a showcase for our much-ballyhooed youth academy. Call it the Wenger method. This is by no means a bad idea. In fact, quite the opposite. The likes of Kakuta, Jeffrey Bruma, Fabio Borini, Josh McEachran, among others, have earned the right to represent Chelsea at the elite level. I think we can expect a smattering of veteran presence anyway, particularly if the team manages to advance into the deeper stages of the competition.

Silverware, meanwhile, may be out of grasp for such inexperienced club members. An extended stay, however, is far from a reach.
Prediction: Quarterfinals

FA Cup
A fourth FA Cup in five years? Certainly not out of the question.

Chelsea have become modern-day specialists in this competition, not exactly something I would have expected when we captured the second FA Cup in the club's history at the turn of decade. We have featured in four finals since, winning three. So very impressive. There's no reason to suggest this exemplary run cannot continue. Of course, form and health will go a long, long way in determining just how far we can go.

Champions League
Who the hell cares? Really. Am I the only still disenchanted with this pompous affair? I trust not.

Certainly a win would do no harm. But I can say, with full confidence, that I could care less if it happens. We have reached a final. Had another stripped from our grasp. And been gifted a wealth of memories in the process. Of course this is the prize our owner craves most - thus the appointment of King Carlo. Thus the club and its players will no doubt chase this dream with reckless abandon once again. I applaud them. I'll ride the wave of emotion, the highs and, ultimately, the lows, with them the entire way.

Will we win? I say no. And, again, that doesn't bother me. Not one bit.
Prediction: Semifinalists