Update: Table was showing Arsenal's and Manchester City's names swapped, for some reason. I've fixed it.

I think we're just about coming to the end of our little sojourn, and so we're ready to publish some results. Let's first go back over what we've learned.

This leads us towards a table that lists expected goals scored, goals conceded, goal differential, and points. Since we dealt with the goal differential directly during steps 2 and 3, I had to manually adjust the expected goals scores and conceded by one or two goals to get things to match up correctly. If I had thought about this properly earlier, it wouldn't have been necessary, but such is life. Bear in mind, of course, that table below is full of projections - I've already discussed the sort of errors we get when back-checking - and there's a lot of things that can change over the course of the season. But it's pretty informative anyway (I hope!). 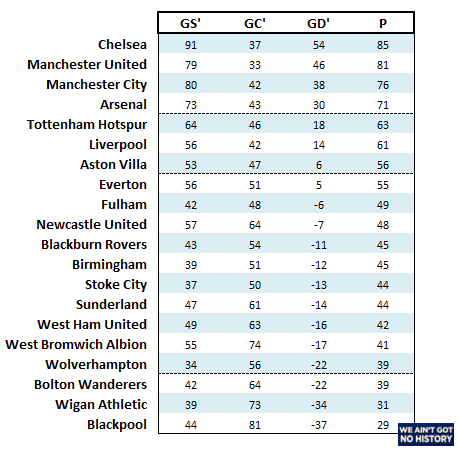 Note that try as I might there's no way to project total wins, draws, and losses from the data - there just are too many paths to get to a certain points total (it's computationally impossible to find the most efficient one), and I didn't feel like simply making numbers up at this stage.

We have Chelsea win the league with 85 points by a four point margin over arch-rivals Manchester United. This gap may well be even closer due to the age of Chelsea's squad, which is a question to be tackled at some later date. The big four looks to have been well and truly broken up, with Manchester City rising to third and keeping Liverpool down all the way at 6th place. Fulham are the biggest risers, going from 12th last year tonight, but at the other end of the table long-time Premier League clubs Wigan Athletic and Bolton face the drop, with Wigan in particular looking to be in precarious position. If you're a fan of one of the clubs shown relegated here; don't worry - this doesn't condemn your team any more than it guarantees another title for Stamford Bridge. Every year teams randomly (yes, randomly!) collapse or do inexplicably well, and no amount of statistical work will ever be able to take the place of the long slog of the actual Premier League season.