In part three, we discussed  the conversion between the Championship and the Premier League for newly promoted teams, and built a complete set of expected goal differentials for the entire league next season. Let's take the next team now and convert goal differential into points.

There are theoretical ways to do this, of course, building functions up based on goal distribution around the league. This paper by Dr. Howard Hamilton highlights an extremely clever statistical approach, predicting points from goals scored and goals allowed to within four or five a season. However, implementing it would take too much time and data I don't have available. So I did things the quick and dirty way. Here's a graph! 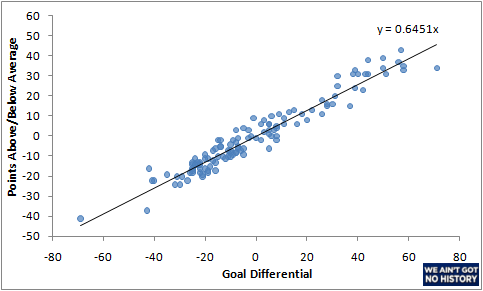 R2 on this result is an astonishing 0.935, which means that it's an essentially perfect fit. This gives us an easy method to calculate points: P = Pavg+GD*0.6451. Nice, huh? We'll apply everything we've learned so far to give us a (mostly) complete league table next time.