When we last left off, we were wondering how to account for the promotion of Championship sides into the Premier League. There's clearly a vast gulf in quality between the two, and goals scored against lower-league defences may not be very indicative of a team's ability to put the ball into the net against top teams.

So is there a way to look at clubs coming up into the league? I looked expected goal difference for teams coming into the league from the Premiership as though the numbers for goals scored and allowed in the previous year were accomplished in the top league. After taking money spent on transfers into account, I then compared the actual goal differential to the expected, and got an average different of -43 goals per season, with a standard deviation of about 17. Predicting sides from the Championship is clearly hard work! Anyway, the results were incorporated into the numbers for West Bromwich Albion, Blackpool, and Newcastle United's 2009/2010 seasons, and I got the following (full) table. (NB: Slight alteration from the round two numbers for the rest of the sides as I forced the sum of the goal differential to equal zero) 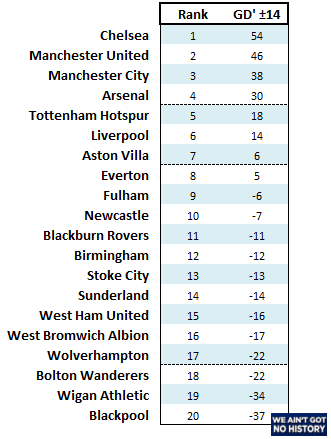 Poor Wigan. I have Blackpool as cellar-dwellers, and Wigan just ahead of them, and then there's going to be a huge scrap between several sides to avoid the final relegation place. Meanwhile Newcastle make a return to the Premier League, securing a top ten finish in close competition with Fulham and Blackburn. At the ninth spot there's a clear gulf in talent between the teams that have never been relegated and those who have, and Chelsea are sitting pretty in first place - although I would caution that this merely makes us favourites rather than locks to win anything. Besides, there's another factor to take into account - the goal differential to points conversion.