In part one this morning I looked at predicting goal differential based on goals scored and goals conceded in the past year. It's not a perfect way of doing things, because it doesn't really take into account squads being strengthened or diminished in the transfer market. I decided to run the difference between expected and actual values of goal differential against the money each club has spent on players in each of the past five seasons. Although it's often the case that new faces don't work out, we have to assume that teams know what they're doing, and in this case money is an ok measure of talent, and will certainly help us sharpen up our predictions.

Ready for the graph? 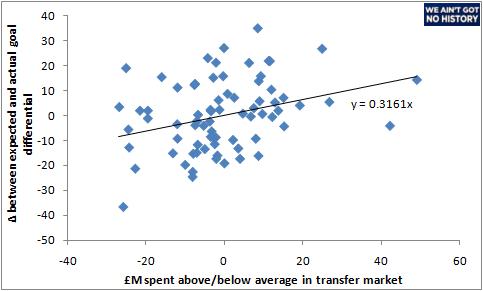 Figure 1: Relationship between spending on the transfer market and error in expected goal differential

What this is telling us, essentially, is that for every £1M spent above the market average, teams can expect their goal differential to improve by a third of a goal. Similarly, if they don't spend money they should expect to slide backwards as the rest of the league catches up to them. We can integrate this finding into our earlier values as follows: 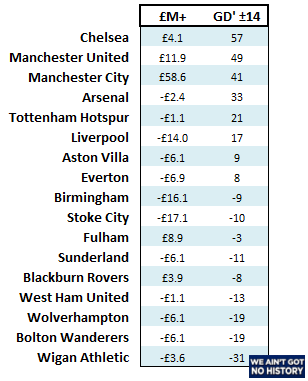 Note that the standard deviation on the goal differential has increased a little, due to the added uncertainty of a new variable. We can see that the table no longer looks so familiar - Manchester City's millions are pushing them up to third while Arsenal drop to fourth. In mid-table big spenders Stoke and Birmingham City make some gains, while poor Wigan at the bottom is looking quite forlorn.

Ok then, but where are the newly-promoted sides? Surely they'd be giving little Wigan some company? We can introduce metrics to measure the Championship squads arriving in the league, but only if we have a good translation between the Premier League and the Championship. That's next.