Share All sharing options for: More Information on Bertrand Traore

I'm doing my best to round up all the stuff can find (i.e. not much) about 14-year old Bertrand Traore, the child sensation who was snapped up by Chelsea today ahead of the groping talons of Manchester United. He's clearly a big deal in his home country of Burkina Faso, with the national minster for sport taking time out of the national football awards ceremony. For those not aware of where exactly Burkina Faso might be, I have included a map which takes into account a rumoured recent name change: 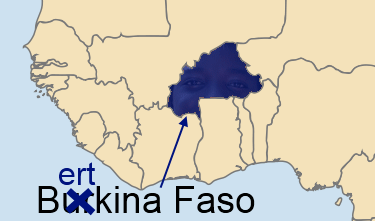 As for the player himself, he's a child (he turns 15 on Sep 6th) who's been playing with the big boys. Sort of. Traore comes to the Blues via the youth ranks of French club Auxerre, where his older (but still quite young) brother Alaine plays midfield. He was the youngest player at this year's U-17 World Cup, and he started two games; featuring in a draw against New Zealand and a loss to Turkey. Naturally left footed with enough speed to play on the wing, he drew rave reviews for his poise and technical ability. He's not yet physically developed enough to play anywhere outside of a youth set-up, but once he fills out we might expect him to drift away from the wings to become a central midfield playmaker. At 5'10" already, his ultimate size shouldn't be an issue.

Here's a quote from the younger Bertrand's coach at the U-17 World Cup:

"He could become a very great player because he can do everything with the ball, he has a good eye, he can play good passes, he has control, he has everything.What he is lacking is physical ability to compete with bigger players in a one-on-one situation. He can reach any level if he comes into good coaching."

Clearly we won't be seeing anything from him any time soon, but players with that kind of technical skill and vision at such a young age are a rare commodity. As long as no silly money was spent, it's a good buy, the sort of gamble that might churn out the next Frank Lampard in a few years. But probably not. Teenagers are extraordinarily hard to predict, and until anyone actually sees him in action against English competition we won't have a good idea of what exactly we have on our hands.

I can't believe I just wrote about someone born in 1995.