A Quick Thought On Didier Drogba

Share All sharing options for: A Quick Thought On Didier Drogba

Just playing around with some numbers, curious as to Didier Drogba's impact on the team offence last season. I think I'm in the minority when I say that most of the time I think Drogba's play can be disruptive not just to the opposition but to Chelsea's play. He's clearly a fine striker and a fine weapon to have in our arsenal, but he's not always the right man for the job, and I thought that the team looked truly exceptional at times when he didn't feature, notably in the 7-2 and 7-1 wins over Sunderland and Aston Villa.

Memory is not the most reliable source of knowledge in the world, though, so I decided to take a look a little deeper. I got expected goals per game against each team by tallying up their goals conceded, removing those Chelsea scored, and dividing by 36 (the number of games they played that didn't involve the Blues). This figure is intended to represent how many goals an average team might expect to score against certain opposition. I then went through Chelsea's fixture list and subtracted the expected goals from the goals scored to give us a measure of goals above expected per game (I'm calling this value G-X, and we'll see if the name sticks) - or, in other words, how well the offence did. We obviously expect Chelsea to consistently score well by this metric, as they were the most dangerous team in the country last year, scoring 103 goals in league play. After I calculated G-X, I sorted by games Drogba played in and those he didn't.

Graph after the jump.

First a couple of notes - I didn't adjust for home/away (it'd kind of kill the sample size) and I only looked at Premier League games. No attempt was made to adjust the expected goals based on the opposing roster. The lone game Drogba appeared in as a substitute was discarded from the set. With all that said... 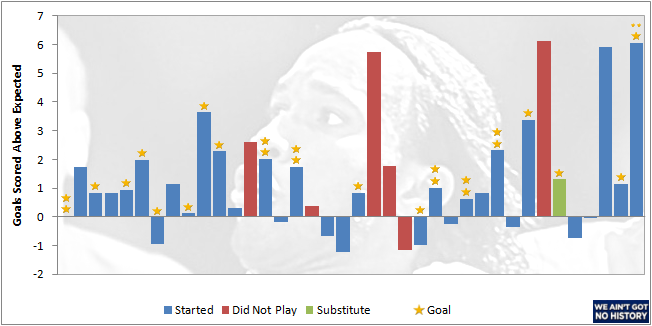 Figure 1: Chelsea's goals above expected for the 2009/2010 Premier League Season.

With Drogba in the lineup, the team averaged a G-X of 1.10. Without him, that value jumps to 2.57. Obviously we're talking tiny samples here, as Drogba started in 31 out of 38 Premier League games last year, and most of the games he missed were due to international duty. What this does tell us is that I remembered correctly, and that Chelsea's offence was indeed more potent without the talismanic Ivorian in the lineup. What this means for the future I really couldn't tell you (the effect certainly isn't the 1.5 goal per game swing that last year's data show), but it's clear that without Drogba, Chelsea have done just fine so far.