A Quick Look at Chelsea's Defence

Share All sharing options for: A Quick Look at Chelsea's Defence

For years, Chelsea's defence has been the stuff of legends. Jose Mourinho's men were nigh-on impenetrable at the back, conceding just 15 goals in the 04/05 season and a still-impressive 22 the year after that. Fast-forward to the 09/10 season and Carlo Ancelotti's title winners have looked rather different. While they scored a record-breaking number of goals last year, they also looked frail at the back for the first time since the reign of Claudio Ranieri, although it's worth noting that they were only four off the pace of the defensive leaders last season.

The players, by and large, were the same. John Terry has been a mainstay in the side since the turn of the millennium, the now-departed Ricardo Carvalho featured often, and the players that were brought in - notably Branislav Ivanovic and Ashley Cole - are far superior backs than those they replaced. It's extremely difficult to apportion responsibility for goals conceded into individual players, but I think that most would agree that on paper the defence is still relatively strong. So what's changed to cause the slow rise in goals conceded by this team (see graph below)? 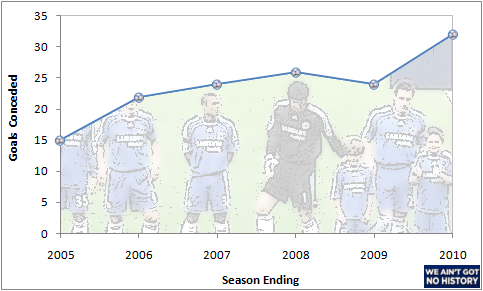 Probably the most important thing to point out here is that Premier League average in the conceded charts is a touch under 49, and the standard deviation is a robust 13 goals per season, which is to say that Chelsea had to be both very good and very lucky during their first title-winning campaign. The slow creep upwards might look terrifying, but it's probably driven in large part by regression.

That's a bit of a cop-out though. Claude Makalele, defensive shield extraordinaire is gone, replaced by Michael Essien, more capable elsewhere on the pitch but not a match for the French master as a holding player. Riccy Carvalho's brilliant ability has dimmed with age, to the point where the man Chelsea couldn't do without has been sold to Real Madrid for the sum of £6.7M. His replacement (who has been phased in relatively slowly due to Carvalho frequently missing games), Alex, is a highly competent centre half, but not nearly the jewel in Chelsea's crown that Carvalho at his prime could claim to be. John Terry may have lost a step, exposing further his brutal lack of speed and allowing strikers to slip through the net. Even Petr Cech's form has taken a tumble, the goalkeeper - and by extension his defenders - no longer seeming comfortable with dealing with crosses and set pieces.

So probably it's a bit of luck and a bit of turnover in personnel. Personally, I think Ricardo Carvalho is irreplaceable, and Chelsea are simply not going to be able to replicate their defensive performances of the mid-decade with any player available on the market. But that doesn't mean they need to worry overly about the back line. For all of John Terry's faults (and goodness knows there are plenty), he knows exactly where to position himself and is still supremely skilled at winning the ball in the air. There are also very few players you'd want between a striker and the goal in the penalty box either, Terry showing time after time how brave* he is by lunging into the path of any and every shot he can reach.

He will be partnered by Alex, the Brazilian international. Alex is a no-nonsense defender, perhaps lacking the technique and tactical mind of Carvalho but making up for it with brute strength and surprising speed (although he's still not fast). A speedy colleague for Terry is probably the key to Chelsea shoring up the defence, as it will allow the captain to push further upfield to mop up attacks without worrying too much about players nipping in behind him, and Alex may not be that player. Personally, I would rather see Branislav Ivanovic play in the middle, as the Serbian has all the qualities you could ask for in a central defender despite finding himself on the Chelsea right last season. His imperious performance in the Community Shield match gives an indication of what you might see should Ancelotti decide to tuck the Serbian inside when first-choice right back Jose Bosingwa returns to the team.

With just three quality centre backs on the team before you start getting into Chelsea's youngsters, there's a bit of a worry about depth. It's entirely possible that Ancelotti has enough faith in Slobodan Rajković, Sam Hutchinson, and Michael Mancienne that he's content to use the youth as depth, but I would suspect most of the players need long run-outs in the early rounds of the Carling and FA Cups before was can commit to using them as first choice players if a centre half goes down to a long-term injury, which is a real concern. Benfica and Brazil defender David Luiz has been linked repeatedly with the club, and Chelsea certainly have the funds to bring him on-board if the manager decides to shore up what could be a vulnerable unit.

Fullback is much less of a concern. Ashley Cole and Yuri Zhirkov are both excellent players, Jose Bosingwa is supposed to be returning to full fitness soon, and Paolo Ferreira is a solid backup plan in case everything goes wrong. I'd rather not see Ivanovic get pushed out wide again, despite him playing so well as a right-back last season, simply because I think he's more valuable in the centre, but he's always an option on the teamsheet there. With rumours of Cole going to Real Madrid mostly dead, I wouldn't be worried about the wide defenders in the slightest.

All in all, one of the top back lines in the Premier League, with some questions about form and depth in the centre. It's not going to set records, but it should be perfectly serviceable for league play as long as there are no major injuries to any of Terry, Alex, and Ivanovic. Knock on wood!