"I am actually a little surprised. It looks like Nando is staying. After I spoke with him at the World Cup I thought he would sign for Chelsea. I think it must only be that Chelsea did not meet Liverpool’s valuation. Because, if they had, I am sure he would have made the move."
-David Villa, on Fernando Torres 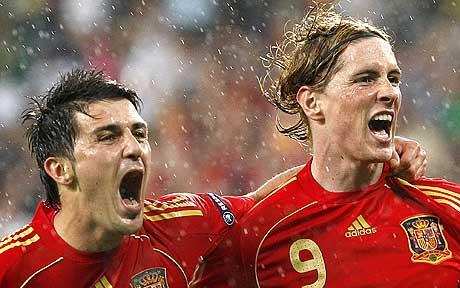 Well, what to make of that? Sunday's Daily Star, as you can see, has some very candid quotage via the prolific Spain and Barcelona striker. Villa, as you know, is a close friend of Torres. I woudn't have expected him to speak on this subject, however.

Villa goes on, too: "Torres is happy at Liverpool in every sense apart from the football. He loves the city, the fans and the players but he is the best striker in the world. He will go if he has to. He would not sign for Manchester City because, for him, the money is not the most important thing. But if Liverpool fail to win anything I am sure he will be at Chelsea next summer."

Sure he'll be at Stamford Bridge? OK. If you say so.

This really only lends substance to the idea that Roy Hodgson has been doing a masterful job masking the real situation. Me, I never bought his recent concession that "(Torres) has told us that he is looking forward to getting back to work and to playing for Liverpool next season." I viewed that more as a statement of hope rather than confidence. Nevermind the fact that we haven't heard anything from Torres himself.

Do I think Torres will be joining Chelsea this summer? No. Do I think he wanted to? Perhaps. More yes than no if I'm honest.

What do you make of this latest development? Who knows, these quotes may not even be accurate.

Also: Make sure you read the Daily Star article in full. There are several more quotes to be perused.