Congratulations to Kakuta: UEFA U19 champion

Share All sharing options for: Congratulations to Kakuta: UEFA U19 champion 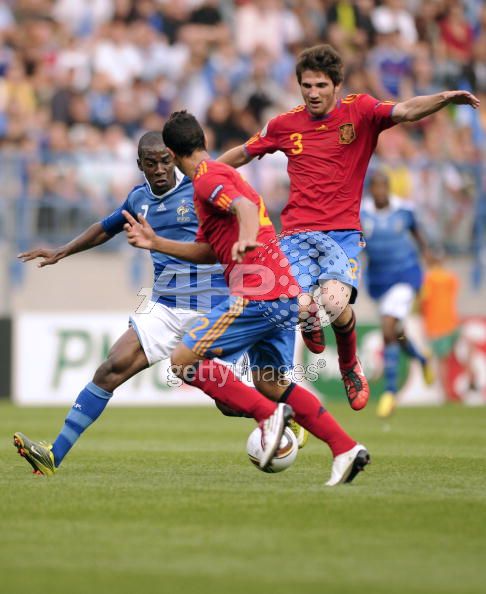 I do believe congratulations are in order for Gael Kakuta. The crown prize of the latest incarnate of the Chelsea youth system played a pivotal role in the UEFA European Under-19 Championship, his marvelous skill setting up the game-winner for France five minutes from full time in a surprise 2-1 win over favorites Spain in Caen.

Alexandre Lacazette headed in the winner from no less than a foot from the goal line following Kakuta's exquisite work, first through the middle and, lastly, out to the right of the penalty area. Here's the rundown: Kakuta slalomed past two Spanish defenders on the counter, before forcing a fine stop with a decently-struck, right-footed strike. He then tracked down the rebound, and immediately chipped a wonderful ball to the back post, one that resulted in the simplest of headers from Lacazette. What a heady play. Brilliant stuff.

Kakuta, 19, was on the peripheral during the opening half, marked out of the match for the most part. But he responded with flashes of his talent over the final 45 minutes. When he has space, this kid is devastating - as seen in the winner. His intelligence, in addition, is something of note. It's a characteristic that may well elevate him from simply good to great.

Peter Staunton of Goal.com had this to say in his scouting report following the tournament's conclusion: "Quite simply, Kakuta is the strongest prospect at these finals, bar none, and will challenge for a starting XI berth at Stamford Bridge next season." Fine praise, indeed.

And thus the hype machine builds. Let's not get too carried away, though. Give the kid the time necessary to blossom. We've yet to see the best of Kakuta - let's make sure we do.

Not so fun fact: Kakuta is entering the last year of his contract at Chelsea. This kind of flew under the radar of most supporters, including me, but nevertheless should be a highly worrying piece of information. It may not be uncommon for youth player contracts to run into their final year without renegotiation, yet that doesn't diminish the fact that something must be done - and quickly. Nothing like losing such a talent to what should almost certainly be a formality.

Visual:
Below are moving pictures from the match. The first is general highlights of the final; the second takes a look at moments specifically involving Kakuta (sans the goal). Some of his touches are scintillating.