The World Cup Final: Who ya got?

Share All sharing options for: The World Cup Final: Who ya got? 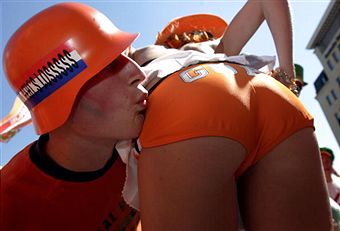 Meh. I hope they both lose.

As written in my latest column for the full-time employers (yes, I actually am a journalist. I know, it's weird):

"Too bad this so-called glorious final with which us, the viewers, have been presented is anything but great. In fact, I hope they both lose. We have Spain, football royalty as they say. Holland, free in spirit and in sport — the Calvinist principle anyone? Neither nation has ever lifted the World Cup. Sunday (2:30 p.m., ABC), one will. Congratulations to whomever that shall be. I guess."

You can sense the hatred can't you? We'll go on.

"The Spanish represent all that is pure and just and righteous within the beautiful game. Or do they? Home grown with an artsy flair only  Catalonia can provide — seven of the national team’s starting lineup play for FC  Barcelona. Movement. Passing. It is all so beautiful at times. It would not be a stretch to  suggest Picasso smiles each time La Furia Roja rework the footballing canvas. Elitist. Yes, the  Spanish are as arrogrant as they are good.  If you don’t play the  Spanish way, you simply are not playing the proper way. No thanks."

Notice I did not go in-depth on FC Barcelona. Kids read these newspapers you know.

What about the Dutch? I'm glad you asked.

"The Netherlands, meanwhile, is more straight forward. This is not your father’s Dutch side. No total football to be found here. Just some fine acting, and a few bruises to match. Take Arjen Robben. One of the world’s great talents. Also one of the world’s great actors. Have we seen diving of such caliber since the Summer Games in China? Get this man a spot opposite James Lipton on Inside the Actors Studio. Wesley Sneijder, meanwhile, has five goals in this tournament — and one of the most obnoxious smirks I have ever seen. And then there is Mark Van Bommel. This man, what is there to say? When Van Bommel is not in the ear of the referee — which is quite often — he’s handing out brutal, almost cynical, challenges to opposition players. I have no problem with being an enforcer, but the level of unsporting behavior this man is responsible for is appalling. The Dutch? No thanks."

Yeah. I think that accurately somes up the final from my perspective.

Onto your perspective. Who are you backing in your heart? In your head? Perhaps you, like me, are still supporting those exciting, youthful Germans. Let the world know, then.

As said earlier, a hearty congratulations to whomever lifts the grand prize. I expect a full-on classic; I damn well better get it.