Some random tidbits in the land of Chelsea. Enjoy (or don't).

• Ballack primed for Middle East move?
Our Der Kaiser may be on the move if the Guardian is to believed (not a given). The paper reckons Ballack could be ready to ditch this ultra-wealthy Engilsh club for one of those ultra-wealthy clubs in Dubai.

Ballack wants a two-year deal from King Roman. The club is, as of right now, only tabling a 12-month contract. Among the clubs supposedly interested in our German are Al Wasl and Al Shabab. Just last week, Fabio Cannavaro called time on his club career by inking on a free with Dubai's Al Ahli.

"The clubs here know there are some top names from the Premier League who have reached the end of their time there and are looking for a final move. They are ambitious," says an UAE source in the Guardian.

"Michael Ballack has been approached and he is now the No1 target for clubs. In Italy the chance of bringing [Gennaro] Gattuso here from Milan is being looked at and Cannavaro coming will help that. Inquiries have also been made about Guti at Real Madrid."

This would not shock me in the least. However, I do expect Ballack and Chelsea to agree a deal in some form before the end of July. Still, watch this space. 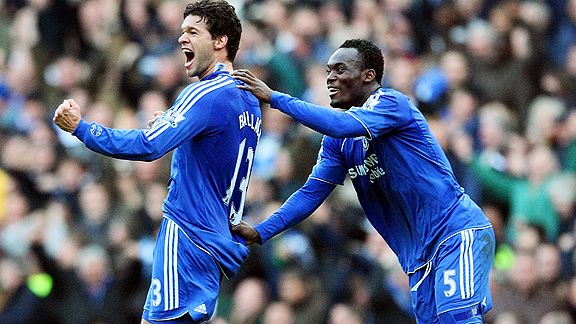 Michael Essien and the famous CFC announced the two parties agreed on a two-year contract extension that sees the most dynamic midfielder in the world locked up until 2015.

"I am delighted because the club has shown a very big confidence and interest in me," said Essien, who hasn't played a competitive match since 1989. I am looking forward to coming back and enjoying my football and winning more trophies with the club. That is why I am here. I think it is one of the most important contracts in my career."

King Carlo added: "I am very happy that Michael has agreed to extend his time with us, as it means he will continue to be a very important player for Chelsea long into the future."

Now that this is sorted, get back on the field sir.

• Chelsea's preseason schedule is coming together nicely.
The winners of an historic first-ever Double will open at Crystal Palace on 17 July before a trip to Amsterdam to face Dutch giants Ajax (23 July). A slide across town to Germany follows, with matches against Eintracht Frankfurt on Sunday, 1 August and Hamburg on the Wednesday, 4 August.

All preseason fixtures will be available for viewing on Chelsea TV.