Poll: Should Drogba risk playing in the World Cup?

Share All sharing options for: Poll: Should Drogba risk playing in the World Cup?

The Mighty Drogs is back. Or so it would be made to seem.

Didier Drogba had successful surgery on his broken arm over the weekend. He fractured the ulna - inner bone - of his right forearm, an injury that put immense doubt on his participation in the World Cup. But, in a sharp turn of fortune, he has rejoined the Ivory Coast at its base in Switzerland ahead of their departure for South Africa on Wednesday. Their World Cup opener is June 15 against Portugal. 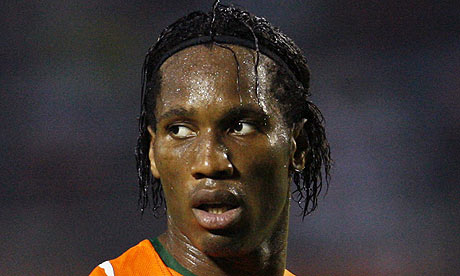 "His recovery has been extremely encouraging. It is suggested that, at this stage, all the signs are good and there is great hope the captain of the Elephants will be in action with his teammates as soon as possible," a spokesman for the Ivorian Football Federation said.

That's amazing, super positive news. Or is it?

I'm asking you, the people: Should Drogba risk further injury by playing for the Coast at the World Cup?

For your benefit, I will provide both sides of the coin.

The Con
There is simply no way this man, no matter how genetically gifted he is, will be fit in time for the opening game of this competition.

A broken arm is, as many of you know, is in fact not a joke. Typical recovery ranges between a few weeks to a few months, dependent on the extent of the fracture. June 15 will represent a less than three-week gap between injury and return.

Furthermore, Portugal represents THE match of the tournament for Ivory Coast. A loss, and, well, you can start booking a short offseason vacation. If Drogba is not fit for Portugal - and face it, I can't see how he could be - then why risk further injury?

His involvement, even if his plays, is unlikely to be to the standard expected, either. How is he supposed to avoid contact, especially considering his game, a large part of it, is based on sheer physicality?

The Pro
South Africa represents the mighty one's final gallop at the world's greatest stage. At 32 years young, you simply cannot see Drogba morphing into Juan Ponce de León, and finding a way to represent his country at Brazil 2014.

Thus he deserves his chance to represent his country on his own continent. He just does.

Drogba also could be likened to the mythical Atlas, what with his influence on not just Ivory Coast football but the country in general. Without him, the Ivorians stand little chance of influencing the tournament. With him and, well, they very well could find themselves still alive come July.

Conclusion
It's yours to make.