This can't be life. Michael Essien. Then Michael Ballack.

Another Chelsea fulcrum appears to have suffered the worst of all footballing setbacks, the one that rips the World Cup dream swiftly from the grasp. Damn this world. 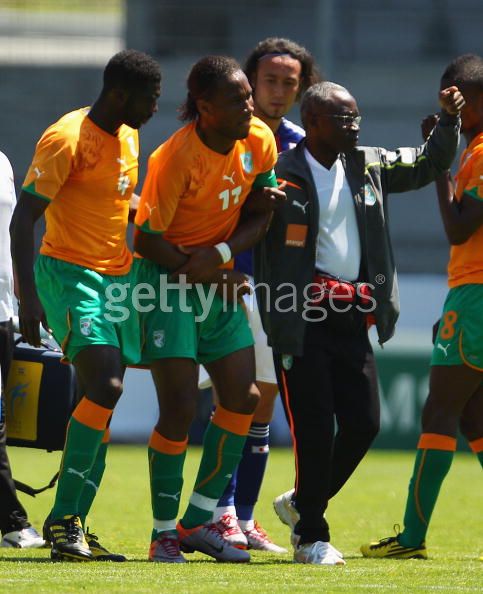 Didier Drogba fractured his right elbow after just 15 minutes of a friendly against Japan in Swizz (no beats). There's been no confirmation, of either the injury or his absence from the Cup, and there have been conflicting reports, which will get to in a few, but it does seem the man with the Golden Boot will not be available for Sven - a massive blow to the Côte d'Ivoire in a competition they probably fancied, at least to make some noise.

Teammate Kolo Toure had this to say following the Japan friendly: "For him, he said, the World Cup is finished. We can just see on his face that he was sad, and when he is like that you can't ask more. It is difficult for us because he is such a really important player."

According to l'Equipe, Drogba was adamant the injury had ruled him out of the World Cup. Then, to no one's surprise, l'Equipe switched lanes and are now claiming surgery could have the Ivorian captain fit in around 10 days. For an injury that usually requires six weeks of recovery? OK, then.

"It is an elbow injury but we don't know how bad it is," Sven said. "We are going straight to the hospital and we should get an answer before we leave. If it is serious, it is very worrying. He's our captain, one of the best strikers in the world. Yes I am worried, of course I am."

We will, as always, keep you posted as news surfaces. Get well soon, Didier.

Moving pictures of the incident. Garbage.

Update (4pm EST): The Guardian, amongst other media outlets, are backing the aforementioned l'Equipe piece. Reports now suggest Drogba suffered a dislocation, not a fracture, as previously feared. He will undergo an emergency operation tonight I believe in an attempt to salvage some sort of role in South Africa.

A spokesman for the Ivorian Football Federation said: "He's not at all out of the World Cup. He can still play." Let's hope so.