Just kidding with that heading. We at Chelsea Offside obviously do not condone player on coach violence, or any violence for that matter - unless it's within the comforts of your own home. So attack that television, particularly when you're watching the Three Lions at this World Cup.

I'm on vacation so I won't be doing much bloggage over the next few days. I apologize. 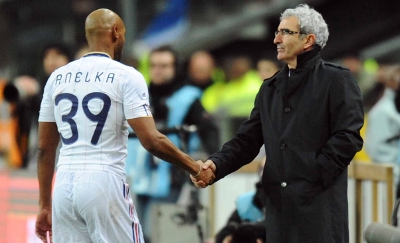 This, though. This I had to highlight. From the Sun: "... it appears Anelka may be catching an early flight home from South Africa."

So may be the rest of the French team.

"Go fuck yourself you son of a whore," he said. Really? That's AMAZING. And AWESOME.

I'm sure he's not the only one who felt that way. French fans, where you at?

Canal+ claim Anelka will be sent home from South Africa tomorrow. I guess that's to be expected, though. He'll probably feel pretty good about getting an early start to his offseason vacation.

French Football Federation vice-president Christian Teinturier believes if there is any basis to the reports about Anelka then he should be sent home from the tournament immediately.

"If the words we have just heard have been used, he has nothing to do there (at the World Cup)," French Football Federation vice president Christian Teinturier told France Info radio. Fair enough.