Share All sharing options for: Blues @ the World Cup - Our Frenchies fall flat

Day 1 in South Africa was eventful for Chelsea boys - just not on the field.

Both Nicolas Anelka and Florent Malouda saw action for France in the country's goalless draw with Uruguay in Cape Town. Anelka started as a lone striker, and struggled. Malouda, meanwhile, received a 15-minute cameo after he was dropped from the XI for reasons we will touch on shortly.

Overall? Poor day at the office for Blues on international duty. 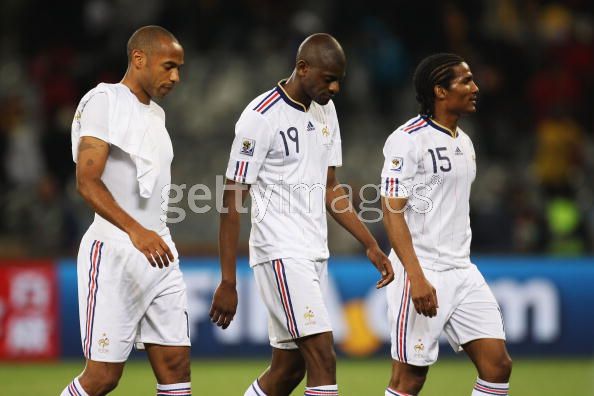 Malouda, among the disappointed.

Nicolas Anelka
Nick played 71 minutes spearheading a 4-3-3 - or was it a 4-2-3-1. Either way, it was far from what he's used to, and what's he has excelled in, at Chelsea earlier this year. Why so different? The absence of a winger opposite Ribery. Sure, Sidney Govou was out there but did anybody notice, particularly in the second half?

Nico provided industry, but there was no edge to his play. He kept dropping further and further into midfield, similar to what he does with Chelsea at times, leaving the ineffective - and apparently disliked - Yoann Gourcuff among others to fend for scraps up top in his absence. At least they got a taste of what Anelka has been dealt of late.

The team was just listless. That France to reach the semifinals pick in my bracket predictor is looking gooooood.

Rumors were swirling ahead of kickoff when our players' player of the season was surprisingly dropped from Raymond Domenech's starting XI.

Reason 1: Flo was apparently chastised by not just Domenech, but also new France captain Patrice Evra for being too aggressive in training. I'm not sure I would be upset over that, but that's just me. Reason 2: The other potential explanation for his exclusion was that Malouda, not one to hold his tongue, had hurt Domenech's feelings once again by questioning the Black and White era cartoon manager's reasoning for including Gourcuff. Then again, apparently much of the team is displeased with the inclusion of Gourcuff.

Either way, he was dropped. And he can't be dropped again. Govou did nothing, NOTHING. Flo could set up a lawn chair in the final third and catch up on the latest John Grisham novel, and STILL do more than poor ol' Sid.

As for his cameo Friday, Malouda was average. Hey, that's better than most of the French.

Next up for Les Blues: Mexico on June 17. Must win?

Tomorrow's slate includes a handful of Blues in the mix. There's this little thing involving Yanks and Redcoats. Me, I'm in the American capital for that one - so an update may be a tad late ...